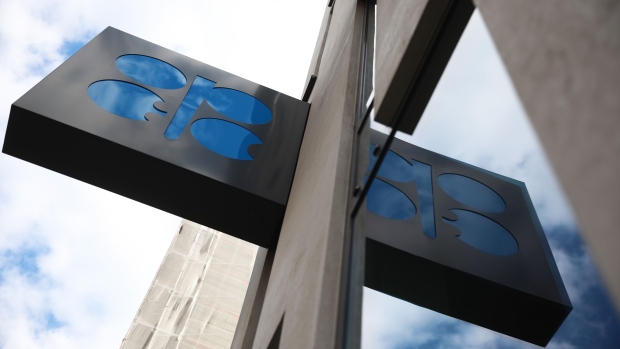 An OPEC sign hangs outside the OPEC Secretariat ahead of the 172nd Organization of Petroleum Exporting Countries (OPEC) meeting in Vienna, Austria. Photographer: Akos Stiller/Bloomberg , Bloomberg

Major oil producers agreed to slash output as feuding members of the OPEC+ coalition buried differences in an effort to lift the market from a pandemic-driven collapse.

The Organization of Petroleum Exporting Countries and its allies, meeting by video conference on Thursday, now have the outline of a deal to cut production by 10 million barrels a day, delegates said. Importantly, Russia has agreed to make deep cuts, the delegates said.

Oil prices pared gains, trading up 1.6% in London at $33.37 a barrel as of 4:13 p.m. local time. That reflects concern that the volume of cuts being discussed equates to just a fraction of the demand loss, which some traders estimate at as much as 35 million barrels a day.

It’s unclear whether the tentative deal is contingent on the U.S. also committing to curbs at talks on Friday. An agreement from OPEC+ and a broader alliance -- including America -- is crucial to reviving prices that have sunk to an 18-year low. Not only oil companies, but entire oil-dependent economies need the market to rebound if they’re to balance ailing budgets.

Friday’s Group of 20 talks will provide the forum for U.S. President Donald Trump to respond to OPEC+’s agreement. The Kremlin has insisted that America must do more than just let market forces reduce its own record production. Trump, meanwhile, has said his country’s cut will happen “automatically” as low prices put the shale patch in dire straits.

If OPEC+, the U.S. and other producers can cement an agreement at the G-20 meeting, the curbs would dwarf any previous market interventions. That’s something that the physical market for crude -- trade in actual cargoes rather than futures contracts -- needs immediately, but it won’t match losses from the unprecedented slump in demand.