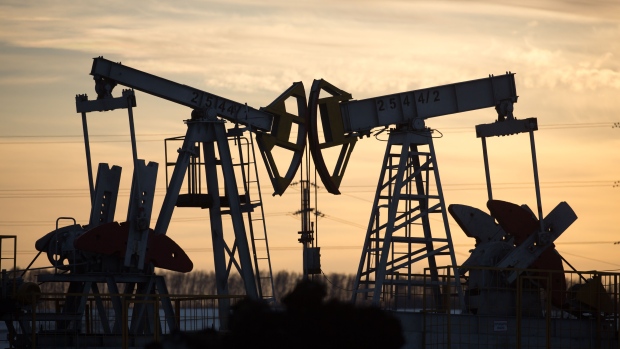 Oil pumping jacks, also known as "nodding donkeys", operate in an oilfield near Almetyevsk, Tatarstan, Russia, on Wednesday, March 11, 2020. Saudi Aramco plans to boost its oil-output capacity for the first time in a decade as the world’s biggest exporter raises the stakes in a price and supply war with Russia and U.S. shale producers. Photographer: Andrey Rudakov/Bloomberg , Bloomberg

Oil-production limits adopted by a group of major crude suppliers will soon bring prices back to “normal,” according to the oil minister from the United Arab Emirates.

When energy markets were in freefall as the coronavirus pandemic crushed demand, crude rising to US$40 a barrel was “a dream,” the U.A.E.’s Suhail Al Mazrouei said during a conference call on Monday. That was before renewed efforts among the OPEC+ group of countries to make unprecedented production cuts.

Prices could be back to “normal” within a year or two as cuts approaching 10 million barrels a day drain excess barrels from the market, Mazrouei said during the call hosted by the Atlantic Council.

The OPEC+ group agreed to cuts in April to counter the coronavirus pandemic’s impact in decimating oil demand and last week extended the reductions through July. Led by Saudi Arabia and Russia, the group aims to support a rally that’s seen Brent crude more than double to almost US$40 a barrel since late April. That success depends on all OPEC+ members meeting their quotas, as well as on producers outside the group not resuming production growth too quickly, Mazrouei said.

“In previous deals we had countries cheat because there was no rule. Now there is a rule, so countries are coming and stating their commitments,” Mazrouei said. The agreement has effectively created a “permanent” group of countries that will coordinate to manage crude markets.