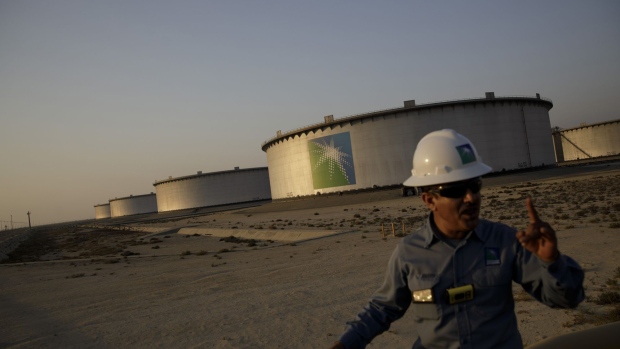 An employee walks past crude oil storage tanks at the Juaymah Tank Farm in Saudi Aramco's Ras Tanura oil refinery and oil terminal in Ras Tanura, Saudi Arabia, on Monday, Oct. 1, 2018. Saudi Arabia is seeking to transform its crude-dependent economy by developing new industries, and is pushing into petrochemicals as a way to earn more from its energy deposits. Photographer: Simon Dawson/Bloomberg , Bloomberg

(Bloomberg) -- OPEC and its allies kept the oil market guessing about whether they will increase production next month, as ministers began a second day of talks against the backdrop of a resurgent pandemic.

With crude already in a bear market as the omicron variant of Covid-19 imperils demand, traders had been widely expecting the alliance led by Saudi Arabia and Russia to defer their next monthly supply hike. Yet ministers were going into Thursday’s talks with an open mind and the 400,000 barrel a day increase scheduled for January was still an option, delegates said.

The cartel’s Joint Ministerial Monitoring Committee, which oversees the OPEC+ accord, met briefly on Thursday without making a policy recommendation, delegates said, asking not to be identified because the information wasn’t public. On Wednesday, the coalition’s technical experts forecast that markets face a surplus in the first quarter that, though smaller than initially thought, remains substantial.

Oil futures were little changed near $65 a barrel in New York, having plunged into a bear market earlier this week.

As the full session of ministerial talks began, the outcome was still up in the air. Despite the sell-off, Riyadh faces pressure from the U.S. and other key consumers to ensure supplies remain plentiful enough to stave off an inflationary spike. Ignoring such considerations could strain the kingdom’s already-fraught relations with Washington.

Yet U.S. oil futures are also down about 20% from the seven-year high reached in late October, when the recovery in global oil demand from the pandemic was stirring fear over the inflationary danger of surging fuel costs. That stark reversal has OPEC+ on the back foot.

“The sudden appearance of a new and potentially more dangerous variant comes on top of new lockdowns,” Angolan Minister of Mineral Resources and Petroleum Diamantino Azevedo said at the opening session of the meeting on Wednesday. “In these uncertain times it is imperative” that OPEC+ “remain prudent in our approach, and prepare to be proactive as market conditions warrant.”