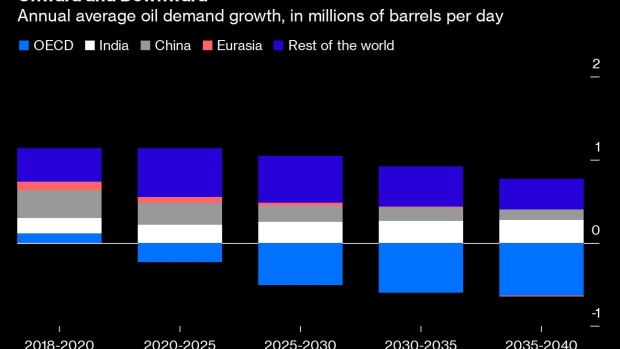 (Bloomberg Opinion) -- The Organization of the Petroleum Exporting Countries this week published its annual World Oil Outlook, a reliably huge and dense examination of the future of the cartel’s main product, as well as the markets that will drive its growth and compete against it. Bloomberg Opinion’s Liam Denning referred to this year’s outlook as “dour” and, in the medium term, even despairing of its members’ contribution to the global supply of crude oil, natural gas liquids and other liquid fuels. Let’s examine OPEC’s views on hydrocarbon demand, key sectors and the future of energy in general.

While the global oil market is reliably huge, in OPEC’s view, parts of it are soon to be ex-growth, and by 2040 — the end of its forecast — global demand will hardly grow at all. Starting in 2020, oil demand growth in OECD countries turns negative. India and China are reliable growth markets throughout, though to a declining degree, while demand from Organization for Economic Cooperation and Development countries continues to erode. The net result is that oil demand is expected to grow by only 100,000 barrels per day in 2040, in a market with daily demand in excess of 110 million barrels. A 0.09% growth rate is very close to no growth at all.

Demand growth is also highly concentrated in just a few sectors. Road transport, the largest chunk of oil demand today, and petrochemicals, the second-largest, also account for almost 60% of total demand growth. In terms of relative growth, though, aviation is tops, with almost a one-third growth in demand from 2020 to 2040.

Road transport might be the king of oil demand, but OPEC is changing its tune on cars, even if slightly. Its expected passenger vehicle fleet size, almost 2 billion in 2040, is hundreds of millions of vehicles more than my BloombergNEF colleagues expect. More interesting, though, is OPEC’s consistency in reducing its expected fleet size each year.

It doesn’t look like much year on year, but since 2014, OPEC has reduced its expected number of new cars on the road by nearly 200 million. For comparison, there are just over 250 million passenger vehicles in the U.S. today.

OPEC’s vision of total demand growth — less than 10% in two decades — reveals another finding: Oil is not the biggest contributor to meeting growing energy demand. That would be natural gas. But oil also trails wind, solar and geothermal energy.

Here’s an update to a data set Denning and I explored in our take on OPEC’s 2018 outlook: the number of appearances of keywords or concepts over time. Last year, we noted that the number of mentions of “electric vehicles” and “tight oil” were exactly the same. This year, given that the outlook is significantly shorter than it was last year, I’ve adjusted the number by page count. In 2019, “tight oil” is narrowly ahead of “electric vehicles” for mentions.

Hot on the heels of both of these significant drivers of system change are two other concepts: “hydrogen,” which could be a significant replacement for hydrocarbons in the energy system (as well as a new investment opportunity for oil and gas firms), and “climate.” “Hydrogen” is on its way up, while “climate” is at nearly the same level as “electric vehicles” and “tight oil.” It’s worth watching these same terms again next year, and in years after.

OPEC’s latest World Oil Outlook looks at the future of the cartel’s contribution to energizing the global economy, and finds an ever-flattening trajectory. It’s not calling the top on oil demand, but it’s not far from it, either: It looks ahead, and it sees oil’s plateau.