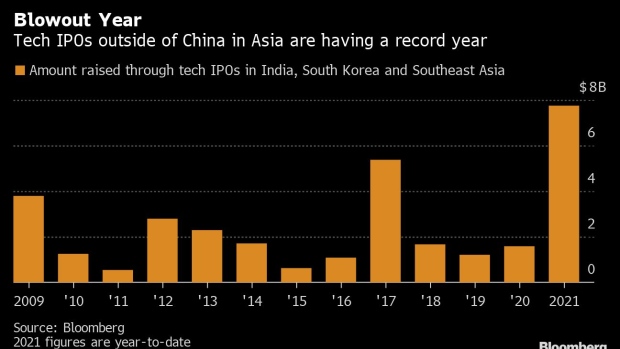 Joshua Wong, secretary-general of the Demosisto political party, wears a protective face mask as he uses his smart phone during a news conference to announce his bid to enter into the unofficial pro-democratic camp primary election for the Legislative Council in Hong Kong, China, on Friday, June 19, 2020. To overcome fractures between the moderates and more radical localists, legal scholar Benny Tai is attempting to organize an unofficial primary on July 11 and July 12 to select favored candidates in each district. Photographer: Chan Long Hei/Bloomberg , Bloomberg

(Bloomberg) -- China’s crackdown on technology companies is prompting global investors to look for new opportunities across Asia, contributing to a record jump in initial public offerings from India to South Korea that shows few signs of slowing.

Tech companies from those two countries and Southeast Asia have raised $8 billion from first-time share sales this year, already blowing past the previous annual peak. The tally is poised to get bigger with planned listings by companies including Indian fintech giant Paytm and Indonesian internet conglomerate GoTo, both of which may break local fundraising records.

Long overshadowed by their Chinese peers, this new crop of startups is coming of age just as Beijing’s clampdown puts a damper on listing and growth prospects in what had long been the region’s hottest IPO market.

The result, some bankers say, may be the start of a new era for tech listings in Asia. Investors are already boosting exposure to markets outside China, with some buying into IPOs from countries like India and Indonesia for the first time. Prospective issuers that historically benchmarked themselves against Chinese companies are now highlighting similarities to other global peers in hopes of attaining higher valuations.

“These are strong companies and stories in their own right, but the overwhelming demand has been enhanced by rotation away from China tech,” said Udhay Furtado, co-head of Asia equity capital markets at Citigroup Inc.

China’s regulatory onslaught, now in its 10th month since the shock implosion of Ant Group Co.’s IPO, has slashed valuations for the nation’s listed tech companies by nearly 40%. It has also forced many startups to pause their IPO plans after regulators announced a stricter vetting process for overseas offerings.

China and Hong Kong accounted for about 60% of Asian tech IPOs since the end of June, down from 83% in the second quarter, according to data compiled by Bloomberg. About three quarters of Chinese companies that listed overseas this year are now trading below their IPO prices.

PT Bukalapak.com, an Indonesian e-commerce firm, raised $1.5 billion around the end of July in the country’s largest ever IPO, far outstripping an early goal of between $300 million and $500 million.

Zomato Ltd., an Indian online food-delivery and restaurant platform, received bids worth 1.5 trillion rupees ($20.2 billion) from large funds for its anchor tranche, making it one of the most popular Indian offerings among institutional investors. The company raised $1.3 billion in July.

The hurdle for allocating capital to tech companies in China “is now much higher than it was even a month ago,” said Vikas Pershad, a portfolio manager at M&G Investments (Singapore) Pte. “The net exposure to China tech is lower and the net exposure to technology-driven business models outside of China is higher.”

One banker who asked not to be named discussing client information said some Hong Kong-based investors who previously focused on Chinese deals are now participating in tech IPOs elsewhere in the region. U.S. hedge funds are also looking at India more closely, another banker said. Morgan Stanley research analysts recently advised clients to re-balance their internet holdings away from China and into India and Southeast Asia.

Whether the enthusiasm will last is an open question. Bukalapak.com briefly dipped below its offering price this month, though the stock has since rebounded. Zomato and KakaoBank are trading 64% and 115% above their IPO prices, respectively.

A growing pipeline of deals will put investor demand to the test. Paytm -- formally called One97 Communications Ltd. -- has filed for a 166 billion-rupee IPO that is set to be India’s largest ever. Policybazaar, an online insurance marketplace, is looking to raise as much as 60.18 billion rupees.

GoTo, formed by the merger of Indonesian ride-hailing giant Gojek and e-commerce provider PT Tokopedia, is planning a domestic IPO this year before seeking a U.S. listing. It’s currently raising funds at a valuation of between $25 billion and $30 billion, meaning it could become Indonesia’s biggest-ever debut.

“There are increasingly diverse sources of capital investing in leading Asia-based growth businesses,” said Gregor Feige, co-head of ECM Asia ex-Japan at JPMorgan Chase & Co. “Sovereign wealth funds are more active across the board. They’re leaning in and the global long-only community is also increasingly comfortable with local listings across Asia.”

The flood of tech IPOs in Southeast Asia and India is poised to reshape markets where benchmark indexes have historically focused on “old-economy” sectors like energy and finance.

Favorable demographics and domestic consumption growth in Southeast Asia “have not translated fully into stock market performance of late, as some of the fastest growing businesses were not listed,” said Pauline Ng, a portfolio manager at JPMorgan Asset Management. The growing representation of “new-economy” companies means these markets “can no longer be ignored,” she said.