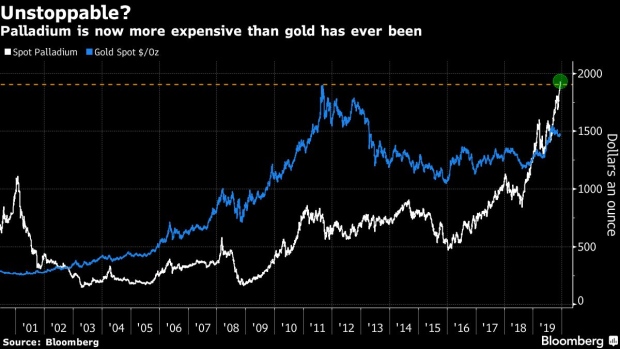 (Bloomberg) -- Palladium rose for a 15th day, heading for its longest run of gains on record, and exceeding the highest-ever price of gold.

Spot palladium jumped Thursday to a record of $1,933.66 an ounce, extending its year-to-date gains to 53%. Prices have been driven by supply concerns as mines in South Africa, the world’s No. 2 palladium producer, were shut down for 24 hours this week because of electricity shortages. State power utility Eskom Holdings SOC Ltd. is still implementing rolling blackouts, although at a lower level.

“It seems that nothing can slow palladium,” said Daniel Briesemann, a Commerzbank AG analyst. “Even though we regard the steep price rise as exaggerated, there is no end in sight to the rally.”

Other precious metals were little changed as investors weighed the Federal Reserve’s signal that it would keep interest rates on hold through 2020. Focus now turns to trade ahead of a Sunday deadline for more U.S. tariffs on Chinese goods, with U.K. elections and the European Central Bank meeting on Thursday.

To contact the reporter on this story: Elena Mazneva in London at emazneva@bloomberg.net