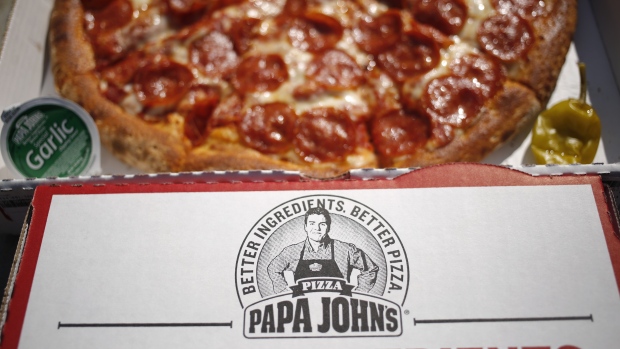 A logo in the likeness of John Schnatter, founder and chief executive officer of Papa John's International Inc., is displayed on the company's pizza box as a pepperoni pie sits arranged for a photograph in Shelbyville, Kentucky, U.S., on Friday, Feb. 10, 2017. , Luke Sharrett/Bloomberg

Papa John’s International Inc.’s outspoken chairman John Schnatter is facing another controversy that is battering the shares of the pizza chain he founded.

Just seven months after exiting the CEO role after making critical comments about the NFL’s national-anthem dispute, Schnatter is under fire following a media report he allegedly used a racial slur and graphic descriptions of violence against minorities on a May conference call with a media agency.

Schnatter said in a statement that the reports were true, calling the language he used "inappropriate and hurtful."

"Regardless of the context, I apologize," the statement says.

A media agency working with Papa John’s decided to cut ties after Schnatter’s alleged behaviour on the May call, according to Forbes. The agency, Laundry Service, didn’t immediately respond to requests for comment.

Laundry Service, owned by sports agency owner Casey Wasserman, told staff in a May 31 letter that it would be ending its work with an unnamed client due to “the regrettable recent events that several employees of Laundry Service witnessed during interactions with a client’s executive,” according to a copy of the letter obtained by Bloomberg News.

The agency didn’t name either the client or the executive in the letter.

Following the incident, Laundry Service said it held a call with the client’s chief executive officer to discuss winding down the media agency’s work with the company. “We also instructed the client that during this transition, the executive who made the offensive remarks must not communicate directly with any Laundry Service employee,” according to the letter. “We are proud to share an understanding with you that racism, and other forms of discrimination, will not be tolerated.”

Papa John’s CEO Steve Ritchie sent an internal memo to team members, franchisees and operators on Wednesday addressing the event, though without mentioning Schnatter by name.

“You may have read the media reports today tied to our company culture. We want to make it clear to all of you that racism has no place at Papa John’s,” according to the memo obtained by Bloomberg News.

“The past six months we’ve had to take a hard look in the mirror and acknowledge that we’ve lost a bit of focus on the core values that this brand was built on and that delivered success for so many years,” Ritchie said. “We’ve got to own up and take the hit for our missteps and refocus on the constant pursuit of better that is the DNA of our brand.”

Forbes reported that the incident took place on a call arranged between Papa John’s executives and Laundry Service as a role-playing exercise for Schnatter to prevent future public-relations missteps.

Schnatter stepped down as Papa John’s CEO in January. The decision followed a November controversy when he said that players’ national-anthem protests were mishandled by NFL leadership and hurt the pizza chain’s sales. Papa John’s later apologized for the “divisive” comments.