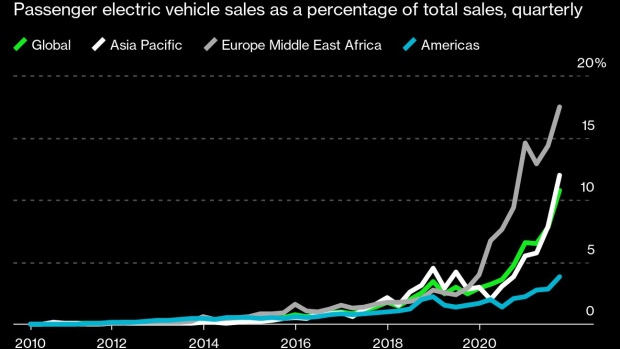 Electric passenger vehicle sales are on a tear. In the first quarter of 2010, 395 EVs were sold worldwide. Last quarter, more than 1.7 million were sold — of those, more than 935,000 sold in Asia. In 1Q 2010, you would have needed three decimal places to show EVs as a percentage of global passenger vehicle sales (0.002%). Last quarter, the decimals hardly mattered: EVs were 10.8% of sales, an order of magnitude increase in little more than four years since passing 1% in the second quarter of 2017.

Those sales are not evenly distributed, however. Europe leads on a percentage basis, with 17.4% of new cars sold with a plug; Asia is second and close to the global average at 12%; the Americas are a distant third, at less than 4%.

Big, aggregated numbers are useful but market-specific numbers are more memorable. China, the world’s biggest auto market, saw nearly 20% electric sales in August of this year. In the U.K., electrics were nearly 30% of sales in November. Just as important, rising EV sales are necessarily eating away at the sales market share of other powertrains, in particular diesel internal combustion engines. Diesels were more than half of sales just seven years ago; last month, they were less than a tenth.

The takeoff in electric vehicle sales has yet to make much of a dent in composition of the global auto fleet. There are more than one billion cars on the road, and today’s new cars increasingly are reliable and long-lived. They will contribute to global oil consumption for decades. Global oil demand, having plummeted during 2020, has come roaring back and according to some trading houses, is at pre-pandemic levels.

Even so, as EV sales continue to increase, their combined displacement of oil consumption will become apparent. Earlier this year, BloombergNEF research found that EVs of all types, including buses and 2- and 3-wheelers, were displacing more than a million barrels of oil demand per day – and that was analysis done before this year’s surge in EV sales. By the middle of the century, oil demand could be 21 million barrels less per day thanks to EVs, compared to an entirely internal combustion engine global vehicle fleet.

When, then, might oil demand peak? Bloomberg Intelligence analysts frequently survey oil investor clients on that question, offering intervals of time in which these sector experts think that global oil demand will reach its top before rolling over.

That is, until Bloomberg Intelligence’s most recent survey last month — in which only 2% of investors responding said that oil demand would peak before 2025, and fewer than 40% said that it would peak before the end of the decade. More than a third of investors responding expect demand to peak between 2025 and 2030, but nearly the same number see that peak happening later, between 2030 and 2035.

What might account for this change in expectation, particularly with such a swift change in the vehicle market and the potential for even greater electric vehicle sales expansion in the near future? One answer: global oil demand’s steep advance since the early days of the pandemic.

The latest oil investor survey’s markedly different expectations about an oil demand peak before mid-decade suggest to me that current market dynamics inform, or at least inflect, longer-term thinking. Another few quarters of electric vehicle sales growth, and another year of analyst calculations of EVs’ effects on oil demand, might lead to different expectations. For that, we will need to wait for another survey. For now, investors still see a demand peak coming, just not quite so soon.