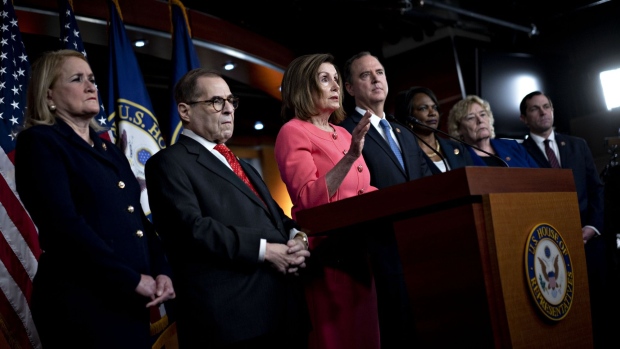 House Speaker Nancy Pelosi named seven Democratic lawmakers Wednesday to present the case for the impeachment of President Donald Trump at his trial in the Senate, choosing a group that includes veteran House chairmen and more junior members with legal or national security backgrounds.

Intelligence Chairman Adam Schiff was picked by Pelosi to lead the team of House managers who will argue that the evidence collected during the months-long impeachment inquiry justifies the Senate removing Trump from office for abusing his power and obstructing Congress.

“There is an overwhelming case, beyond any reasonable doubt, that the president betrayed the country,” Nadler said as he joined Pelosi and the other managers for a news conference at the Capitol.

The House is set to vote later Wednesday to formally designate the managers and transmit the two articles of impeachment to the Senate for a trial that could last past Trump’s State of the Union address scheduled for Feb. 4.

Pelosi, Schiff and Nadler said Democrats will continue to fight for the introduction of new witnesses and evidence at the trial. Senate Majority Leader Mitch McConnell has sought to engineer a swift proceeding that would quickly acquit the president. However at least four Republican senators have said publicly that they want a chance to consider calling witnesses or viewing new evidence.

That decision, made on a simple majority vote, won’t come until after the House managers and Trump’s defense team have presented their cases and answered questions from senators.

“The Senate is on trial as well as the president,” Nadler said.

Pelosi has come under fierce criticism from Trump and Republicans for delaying transmitting the articles of impeachment to the Senate. Since the Democratic majority in the House voted to impeach Trump last month, former Trump National Security Advisor John Bolton has offered to testify to the Senate under subpoenaed. His lawyer has said previously that Bolton has information that wasn’t part of evidence gathered during the impeachment inquiry.

In addition, House impeachment investigators on Tuesday sent phone records and other new evidence obtained from a lawyer for Rudy Giuliani associate Lev Parnas to the Judiciary Committee as potential additional material in the Senate impeachment trial against Trump.

The House managers are expected to quickly begin strategy sessions, setting out assignments to individual members and preparing documents and legal briefs.

Once the House votes, the articles of impeachment will be ceremonially delivered later Wednesday in a scheduled procession across the Capitol to the Secretary of the Senate, formally triggering the Senate proceedings.

There were 13 House managers picked by Republicans in the 1999 impeachment case against against then-President Bill Clinton. Two of those former managers said in interviews they felt the pressure of having the entire nation watching them.

“Be prepared and try not to screw it up,” said Representative Steve Chabot of Ohio, who is still on the Judiciary Committee. He said one of the things that a manager is always conscious of is that “a lot of people back home, as well as the nation, are watching.”

Former Representative Bill McCollum of Floria, in a separate interview, said it’s a serious matter and his advice to the managers is they must “purport yourself accordingly. Do your very best job.”

The two men, both lawyers, said preparation for the Senate trial began almost immediately for the House managers under then-Judiciary Chairman Henry Hyde of Illinois who divided the workload.

His second role was helping to tie the proof of the case together in a summary presentation, and he contributed in delivering what amounted some of the closing arguments of the case.

Chabot said that while this role was one of the most “notable” points of his congressional career, “impeachments in general are low points for our country.”