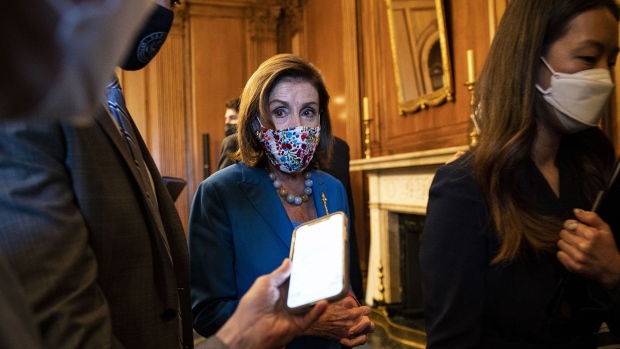 (Bloomberg) -- House Speaker Nancy Pelosi said Tuesday that Democrats are at a decision point on what will be included and what will be left out of their economic agenda in order to move forward with a sweeping social-spending package and a vote on a separate infrastructure bill as soon as this week.

“There’s not that much more time,” Pelosi said after meeting with House Democrats Tuesday morning. “We have to have decisions largely today.”

The California Democrat said she still hoped to have votes on the tax and spending package and the infrastructure legislation by the end of the week, which would give President Joe Biden a political boost as he heads Thursday to summits with other world leaders in Europe.

But that schedule appears unlikely given the differences that remain between House and Senate Democrats on some key issues -- including taxes, healthcare and measures to address climate change, and considering the complexity of the legislation. Progressive Democrats are continuing to insist that they won’t vote on the infrastructure bill without a firm deal on the larger package.

During the meeting with House Democrats, Pelosi said the party should embrace the compromise tax and spending plan carrying much of Biden’s agenda even though it will be substantially less than the $3.5 trillion originally envisioned, according to lawmakers.

Pelosi’s message was “this is not going to be fun. It’s not going to be everything we wanted but it’s going to be bigger than what we could have imagined a few years ago,” Michigan Representative Dan Kildee said after the meeting.

Democrats have been inching toward an agreement on a version of the spending plan that can pass Congress with their razor-thin majorities. Two Senate Democrats, Joe Manchin of West Virginia and Kyrsten Sinema of Arizona, have been insisting that the package shrink. Their votes are pivotal in the 50-50 Senate.

Manchin on Tuesday indicated he may be willing to raise his limit on the overall price tag from $1.5 trillion, which he has held to since the summer.

“You need to keep all options open,” Manchin said in an interview with Bloomberg Television’s David Rubenstein at the Washington, D.C., Economic Club.

But Manchin later said that he doesn’t see the price tage rising to the roughly $2 trillion that Biden has suggested would be the compromise figure.

“I’m fighting for 1.5, and I’m trying to see if we’re going to get a piece of legislation,” Manchin said at the Capitol. “We know the outline. But until you see the text it’s hard to make a final decision. So I can’t tell you specifically.”