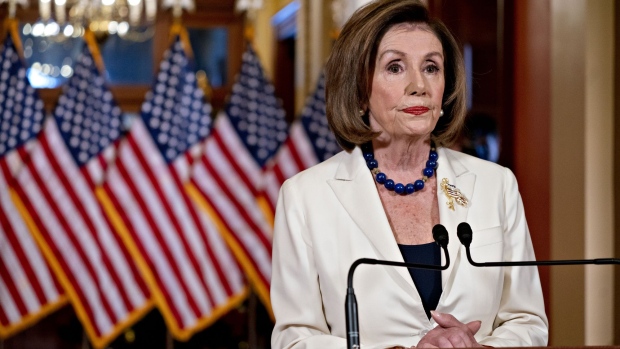 Nancy Pelosi pauses while making a statement in the Speaker's Balcony Hallway at the U.S. Capitol in Washington, D.C. on Dec. 5. , Bloomberg

Speaker Nancy Pelosi said the House will draft articles of impeachment against President Donald Trump for abusing his office in a “profound violation” of the public trust.

“The facts are uncontested. The president abused his power for his own personal benefit,” Pelosi said Thursday at the Capitol. “Today, I’m asking our chairmen to proceed with articles of impeachment.”

The announcement puts Trump on track to become the third president to be impeached in U.S. history. But the chances that the Republican Senate will convict him are scant.

The California Democrat spoke a day after Judiciary Chairman Jerrold Nadler indicated the panel was moving toward charging Trump with abuse of power, bribery and obstruction.

“His wrongdoing strikes at the very heart of our constitution,” Pelosi said. “The president leaves us no choice but to act.”

Trump was defiant on Thursday morning, saying on Twitter that Democrats “have no impeachment case” and challenging them to move fast so the nation can move on.

“If you are going to impeach me, do it now, fast, so we can have a fair trial in the Senate, and so that our Country can get back to business,” the president said in a pair of tweets shortly before Pelosi spoke.

Democrats are focusing in on Trump’s actions in dealing with Ukraine. They allege the president withheld almost $400 million in security assistance to pressure the government there into announcing an investigation involving former Vice President Joe Biden to benefit Trump’s 2020 re-election campaign.

Ukraine wanted the aid, and a White House visit for President Volodymyr Zelenskiy, as a demonstration of U.S. support as it confronts Russian aggression.

A report issued earlier this week by Democrats on the House Intelligence, Oversight and Foreign Affairs committees after a months-long inquiry concluded that Trump abused his power, compromised national security and then tried to cover it up.

At Wednesday’s Judiciary Committee hearing, three legal experts called by Democrats all concluded Trump has committed impeachable acts and warned in stark terms against allowing that to stand. But the scholar called by Republicans argued that this impeachment effort was hasty and the evidence so far has been insufficient to gain broad support for action from the public.

Democrats on the Judiciary Committee have been urged to remain in Washington this weekend to prepare for what officials familiar say are plans for a next hearing, to be set for either Monday or Tuesday.

Democrats set a Friday deadline for the White House to say whether Trump’s representatives intend to participate in any of the additional hearings, including seeking to call or cross examine any witnesses, or submit evidence.