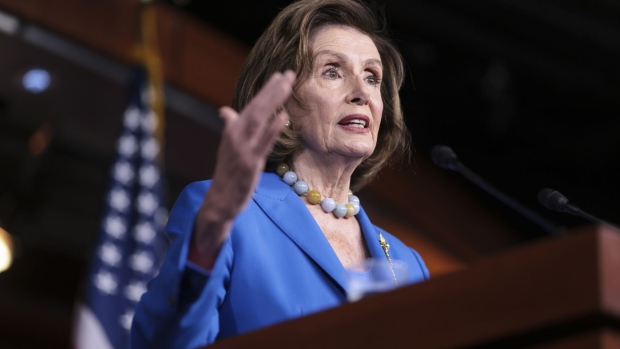 U.S. House Speaker Nancy Pelosi, a Democrat from California, speaks during a news conference at the U.S. Capitol in Washington, D.C., U.S., on Tuesday, Oct. 12, 2021. The House is scheduled to vote on a short-term increase to the government's borrowing limit today, averting the immediate threat of a catastrophic default but setting the stage for even bigger showdown on debt and spending in less than two months. Photographer: Oliver Contreras/Bloomberg , Bloomberg

The talks in Glasgow, Scotland are scheduled to begin Oct. 31 and follow dire warnings from international climate scientists about the urgent need to take action to prevent the worst effects of global warming.

Hoyer, briefing reporters in Washington, said the trip was to “to reiterate our commitment to the objectives that have been set forth in Paris and other places to obtain a very, very significant reduction in emissions.”

A Pelosi spokesperson declined to comment on her travel plans, citing security protocols.

Democratic senators are also expected to attend the so-called COP26 United Nations conference, as are a handful of House Republicans pushing climate action.

The show of force is meant to underscore that the U.S. is committed to using a mix of legislation, regulations, corporate actions and state and local government steps to slash greenhouse gas emissions to meet Biden’s pledge.