The at-home fitness company disclosed other unwelcome news in its earnings report late Thursday, including that it’s cutting the price of its most popular bike, a move aimed at broadening its customer base but one that will also hurt its bottom line this year. Peloton also said it found a problem with the way it accounts for inventory.

And on Friday, the company disclosed in a securities filing that it has been subpoenaed by the U.S. Department of Justice and the Department of Homeland Security for information related to injuries reported by Peloton users and that the Securities and Exchange Commission is investigating the company’s public disclosures on the matter.

The shares fell 8.5 per cent to US$104.34, the worst one-day rout since one in early May -- when the company recalled its Tread and Tread+ treadmills and stopped selling them after reports of injuries and a child’s death. Peloton unveiled detailed plans to restart sales for the lower-priced Tread product on Tuesday, delivering a boost to the stock.

“This is as close to a ‘disaster’ as a company can get versus expectations,” Vital Knowledge founder Adam Crisafulli wrote. The news about an accounting issue “doesn’t sound like a huge problem, but that’s just one more negative to throw on top of this quarter.”

While shares are up about 30 per cent since bottoming out in May, they have struggled to find their footing after soaring in 2020. The company had shed more than a third of its value from a Jan. 13 record, lagging a 18 per cent rise for the S&P 500 over that stretch. 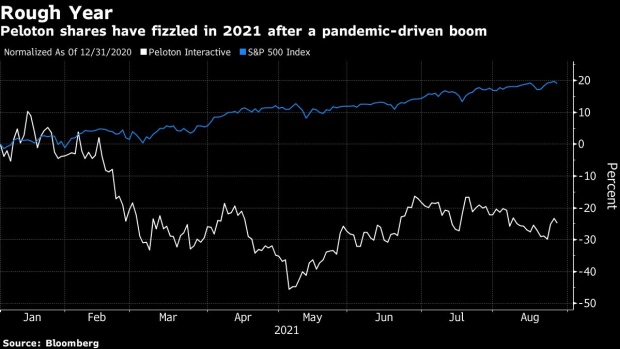 In its results released Thursday afternoon, sales in the just-ended quarter were slightly stronger than analysts predicted: Revenue rose 54 per cent to US$936.9 million. But for the current quarter, the company expects an adjusted loss of US$285 million, with US$800 million in revenue. Analysts had projected sales of US$1 billion on average.

Peloton’s latest struggles have it treading water alongside other companies that had previously been buoyed by stuck-at-home consumers due to the pandemic. With gyms and restaurants reopening, the company is taking a hit, which “may be among the largest” for stocks that saw a spike in demand during the outbreak, according to Crisafulli.

Despite the rocky view for the fiscal first quarter, optimistic analysts stuck to their calls, with the average 12-month price target holding steady at about US$132. That implies a 27 per cent return from Friday’s trading.

Co-founder and Chief Executive Officer John Foley appears undeterred by the negative market reaction. “I think our business is in fantastic shape,” Foley said in an interview on Bloomberg TV Friday. “We had a crushingly good 2021.”

The fitness company’s enthusiasm surrounding the upcoming reintroduction of the Tread indicates the treadmill will likely drive the next leg of growth, according to BofA analyst Justin Post, who upgraded the shares to buy from neutral.

Company executives have expressed optimism that Peloton’s treadmills could become a bigger business than its bikes, despite a grim start for the treadmill business.

In response to the subpoenas, Foley said in the interview that the company “will always cooperate with authorities whenever there’s an investigation. We’re proud of what we’re doing.” He said Peloton has worked with the U.S. Consumer Product Safety Commission to be “on the right side of the line” for the treadmill product that’s set to go on sale.

Peloton has been a darling of Wall Street since its debut in 2019, with investors Baillie Gifford & Co. and Chase Coleman’s Tiger Global Management among its five largest holders. And the returns for early investors have been massive, with the stock nearly tripling through trading prior to the earnings report despite the recent volatility.