Pembina Pipeline Corp. increased its bet on the future of Canada’s turbulent oil-sands industry, agreeing to buy Kinder Morgan Inc.’s Canadian unit and the U.S. portion of a key pipeline for about $4.35 billion.

The deal makes Pembina a major player in the oil-storage business, giving it 10 million barrels of capacity in the crude complex near Edmonton, Alberta, a key hub for oil-sands producers. With the takeover of Kinder’s Cochin Pipeline system, Pembina also becomes a key provider of the condensate that oil-sands companies need to blend with their thick crude to enable it to flow through pipelines.

The acquisition is a major bet on the future of the oil sands at a time when delays to key export pipelines have hampered the industry’s ability to expand and forced the Alberta government to support Western Canadian heavy crude prices with unprecedented production limits, which it extended for another year on Tuesday. The deal also continues a flight of international capital out of the oil sands, following major divestitures from ConocoPhillips and Royal Dutch Shell Plc in recent years.

Pembina Chief Executive Officer Mick Dilger said the deal increases its vertical integration, diversifying its offerings to its oil-sands customers and enhancing the company’s resilience in an uncertain environment. The takeover also gives Pembina additional integration opportunities, and those benefits are reflected in the premium it paid for the assets, Chris Cox, an analyst at Raymond James, said in a note. 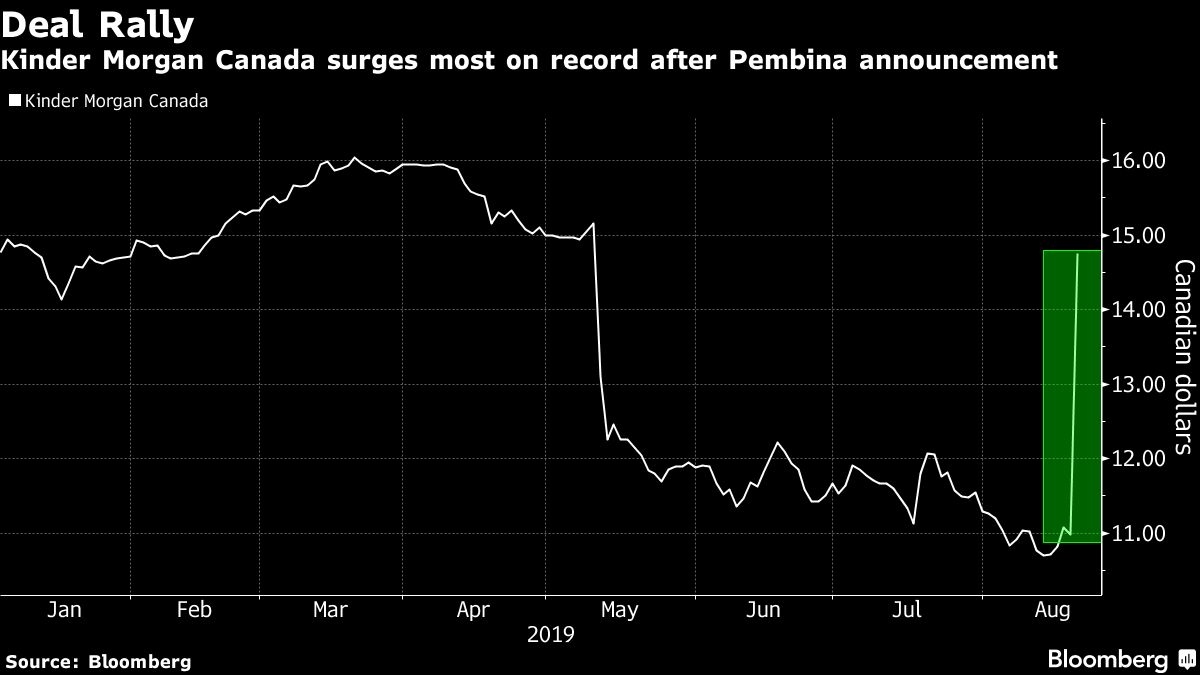 For Kinder Morgan, the agreement comes more than three months after the Canadian unit said it would continue as a standalone company. It held two bidding rounds, “but ultimately concluded that a transaction on satisfactory terms was not available at the current time,” Steve Kean, CEO of both Kinder Morgan and the Canadian unit, told investors on a May conference call.

The transaction values Kinder Morgan Canada Ltd. at about $2.3 billion, or $15.02 per share, based on an all-share exchange ratio of 0.3068 of a common share of Pembina per Kinder Canada security, according to a statement. That’s about 37 per cent more than the stock’s closing price on Tuesday. It values the U.S. portion of the Cochin pipeline at about $2.05 billion for cash consideration.

Before the deals were announced early Wednesday, there was speculation that Kinder Morgan Canada could be a potential buyer for the Trans Mountain pipeline that runs from Alberta to Vancouver. The government bought the line from Kinder last year and has promised to sell the conduit back to a private company after it completes a long-delayed expansion project. Multiple indigenous groups in Canada have expressed interest in buying a stake in the line, and analysts have said the line also might be a good fit for pension funds.

Pembina’s Dilger said on the conference call that the Trans Mountain line would fit into the company’s strategy of serving western Canadian oil producers but that the company doesn’t want to take on the baggage that comes along with the project, which has faced opposition and legal challenges from environmentalists, indigenous groups and British Columbia’s government.

Though Pembina is “uniquely qualified” to operate Trans Mountain, “we don’t want to submerge our entire management team and subject our entire organization and reputation to all the noise that entails,” Dilger said on a conference call to discuss the transaction.

--With assistance from Brian Eckhouse