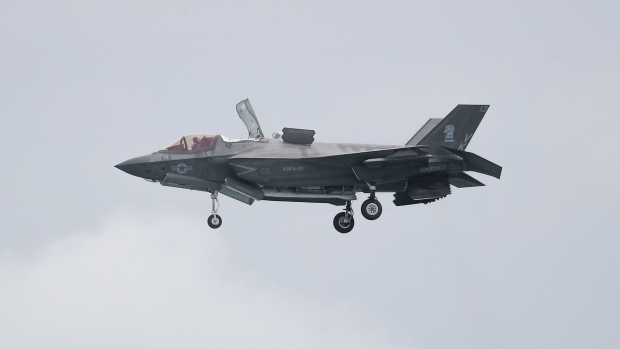 (Bloomberg) -- The Pentagon has put a decision on approving full-rate production of Lockheed Martin Corp.’s F-35 on indefinite hold, as officials remain unable to say when the fighter jet will be ready for combat testing that’s been delayed repeatedly since 2017.

The most recent of many milestones for a full production decision on the $398 billion program -- “no later than March” of next year -- has been scrapped by Ellen Lord, the Defense Department’s undersecretary for acquisition and sustainment.

“Technical challenges and the impact of Covid-19” have delayed preparation of the simulation facility where the sophisticated testing of the costliest U.S. weapons system will be conducted, Jessica Maxwell, Lord’s spokeswoman, said in a statement when asked about a previously undisclosed Dec. 18 memo by Lord. She said a new date would “based on an independent technical review.”

That means it will be months into President-elect Joe Biden’s administration before his new team at the Pentagon has all the information it will need to make a decision on the F-35’s full-rate production, the most lucrative phase for Bethesda, Maryland-based Lockheed.

The simulated combat testing was to have occurred this month, the latest date of an exercise once scheduled for 2017.

Whenever the testing occurs, it will take an additional two to three months to transfer and analyze the data and then draft a final report for delivery to Pentagon leaders and Congress. The report is mandated by law before a decision.

A decision to allow full-rate production will be a seal of approval from the Defense Department to American taxpayers and foreign customers that the warplane has been fully tested, deemed effective against the highest-level threats, can meet its maintenance goals and can be produced efficiently.

More than 600 of the F-35 program’s potential 3,200 aircraft already have been delivered, and the fighter is in use by the military in nine nations, including the U.S. Air Force and Marine Corps. But it still hasn’t demonstrated its effectiveness against the most challenging Russian and Chinese air defense systems and aircraft. That will be measured in a sophisticated on-ground simulator at Patuxent River Naval Air Station in Maryland.

Biden and his aides have complained that Acting Defense Secretary Christopher Miller and the Trump loyalists around him have failed to provide his transition team with adequate briefings, criticism that Miller has rebuffed.

The Defense Department’s F-35 program office is analyzing test preparations and expects to have revised dates for the simulation and for a potential full production decision by Feb. 28, according to Laura Seal, a program spokeswoman.

Robert Behler, the Defense Department’s operational testing director, says in his latest annual report, set for release in January, that the roughly one month of combat testing is now expected to occur in mid- to late-2021.

Maxwell said in spite of the delayed decision the program “will continue low-rate initial production at the planned rate.”