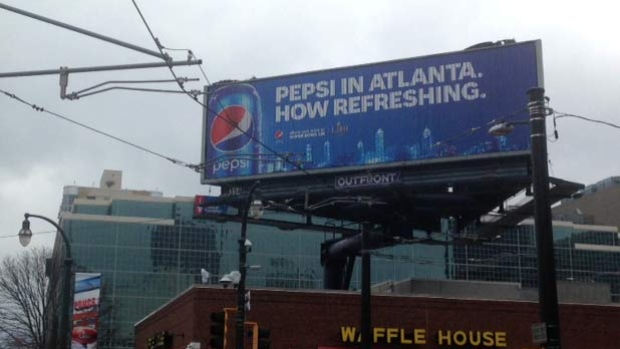 In a city that bleeds Coca-Cola red, PepsiCo Inc. is having some fun with its status as Super Bowl sponsor this year.

About two blocks south of the World of Coca-Cola -- an attraction in downtown Atlanta where visitors pass under a lighted 27-foot-tall Coke bottle -- the marketing team at its soft-drink rival has erected a billboard with a teasing message: “Pepsi in Atlanta. How refreshing.”

Having brands clash is rare for the Super Bowl, where organizers take pains to ensure sponsors don’t have to share the spotlight. Each year, the area around the host stadium and the heavily trafficked fan zone is blocked off for any business that’s not a National Football League partner. The temporary commercial zones prevent the sale of bootlegged items and allow all the “Official _____ of the NFL” companies to showcase their products without competition.

In a twist this year, Coke has property within that restricted area in Atlanta. Its 92,000-square-foot World of Coca-Cola museum is just 800 yards from Mercedes-Benz Stadium, and a short walk from the fan zone, giving the company freedom to infringe, at least partially, on its rival’s party.

“The NFL manages its brand aggressively, and they manage the sponsor brands just as aggressively,” said Ric Campo, chairman of the host committee for the 2017 Houston Super Bowl. “And you’d expect them to. If you wrote a big check to the NFL, and you see a picture online of a rival at the Super Bowl, you’d be pretty upset.”

Cities that bid for the Super Bowl are required to organize these areas -- called clean zones, or permit zones. When those conversations began for Atlanta years ago, Coke’s presence in the clean zone was front and center.

“The question was: Is Coke going to have to cover the World of Coke?” said Rich McKay, president of the Atlanta Falcons and host committee board member. “And the league quickly said, ‘No, absolutely not.’”

Outside of a non-sponsor’s physical property, the zones are tightly enforced. When the Super Bowl was in Houston two years ago, Campo said they had to cover the tires on any food truck that weren’t made by NFL sponsor Bridgestone.

“Super Bowl is one of the most valuable assets the league can provide,” said Arnold Wright, co-head of consulting at the sports and entertainment firm Octagon. “The ability to showcase your product and interact with tens of thousands of people,” he said, “that’s a big part of your return-on-investment calculations.”

Work crews this week have turned much of downtown Atlanta into a shrine to the NFL. A giant building wrap of the Vince Lombardi Trophy, awarded to the winner of each year’s Super Bowl, adorns the 73-story, cylindrical Westin Peachtree Plaza hotel. Bud Light’s medieval spokesman, Bud Knight -- sword in one hand and football in the other -- is wrapped around another tower.

Pepsi is having fun crashing Atlanta’s love fest with Coke. Messages like “Look who’s in town for Super Bowl LIII” poke fun at its rival from downtown billboards, subway stations and garbage cans.

Coca-Cola is taking the ribbing in stride.

“As Atlanta’s hometown beverage company for more than 130 years, we’re thrilled to help our city welcome everyone to town for the Big Game, including our friends at Pepsi,” the company in a statement.

Pepsi and Coke have long been one of the most famous corporate rivalries in the U.S., waging the so-called Cola Wars for decades. Though Pepsi now gets more than half of its revenue from food, such as its Frito-Lay snack line, the battle for soda supremacy remains as intense as ever.

Mercedes-Benz Stadium is a Coke venue, but its contract includes a clause for big events that might have other beverage partners. Fans at Sunday’s game will be able to buy Coke, but the signs will be gone, and there will be no Coke cups. Dasani water bottles will have their logos covered or removed. Pepsi will be served in the suites.

The Coke-Pepsi clash isn’t the only marketing battle afoot. The NFL’s newest sponsor, Lowe’s Cos., unveiled the partnership in Atlanta, saying it was “opportunistic” to target the hometown of rival Home Depot Inc.

Coke, meanwhile, isn’t sitting the game out. On Friday, the company is hosting what it’s calling a Champions Chat with former NFL players “Mean” Joe Greene and Carl Banks at the World of Coca-Cola. The museum has a new football exhibit, and it’s debuting a limited-edition beverage around the “Big Game” (it’s not allowed to use the Super Bowl name).

Don’t expect the company to push the envelope too far. Coke is a valuable corporate citizen in Atlanta, and sponsor or not, it’s helpful for the beverage giant when Atlanta hosts big events.

“These are big-boy companies -- they’ve done this before,” McKay said. “It doesn’t mean it’s not uncomfortable as you do it, but they all know how it works.”

--With assistance from Craig Giammona.