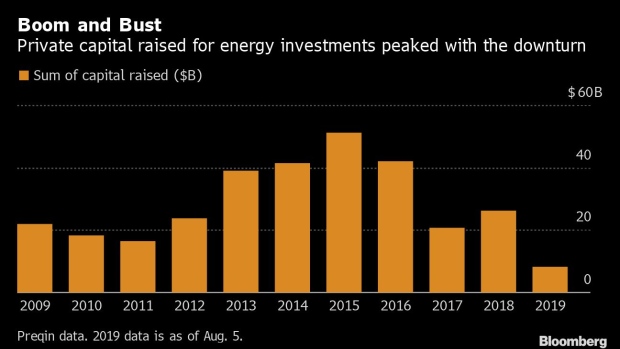 The silhouette of a pumpjack is seen in the Permian Basin near Orla, Texas, U.S., on Friday, March 2, 2018. Chevron, the world's third-largest publicly traded oil producer, is spending $3.3 billion this year in the Permian and an additional $1 billion in other shale basins. Its expansion will further bolster U.S. oil output, which already exceeds 10 million barrels a day, surpassing the record set in 1970. Photographer: Daniel Acker/Bloomberg , Bloomberg

(Bloomberg) -- Oil wells jet out of the scrubby, dusty ground in West Texas’ Permian Basin as far as the eye can see. A gas station off Route 285 bustles with workers in boots and baseball caps. Residents fret about the crumbling road, which has been pummeled by trucks barreling in and out of the oilfields. There’s nothing to suggest the distress that’s mounting in the busiest U.S. oil and gas region.

About 500 miles east, Houston is abuzz about another slump on the way. Restructuring expert Jay Haber, for one, has been fielding call after call from New York with banks, hedge funds and private equity sponsors having to decide whether to sink more money into souring wells or cut their losses.

“People were far too quick to save basically broke companies in 2015 and 2016,” said Haber, a Houston-based adviser at turnaround shop Getzler Henrich & Associates LLC and 30-year veteran of the energy business. “Had oil gone to $80 or $90, things would be better.”

Money managers who specialize in distressed assets followed time-tested turnaround strategies in the Permian Basin, but for many of them, it’s not working. Instead, oil and gas bankruptcies this year are coming at the fastest clip since 2016, according to data from the Haynes & Boone LLP law firm. “Chapter 22s,” or repeat filings by the same company, are also on the rise as capital markets have slammed shut for troubled energy companies.

Energy investing is an inherently volatile exercise, with the fate of companies and investments largely determined by commodity markets and the global economy. When the price of crude dropped from 2014 to 2016 to the lowest in a decade, more than $130 billion of private capital was raised to bargain hunt for energy investments whose value would rise when oil rebounded, according to Preqin.

For those still solvent, oil remains stuck around $55 a barrel -- too low for weak companies to make money. The outlook isn’t great either as the U.S. and China trade barbs over tariffs and predictions of a U.S. recession multiply.

Local bankers and investors in Texas who have built careers in “the patch” say the stress stems not only from the flagging price of oil, but also from outside investors who didn’t understand the game.

“We’d never heard of many of these people,” said Lance Gurley, a restructuring banker for Stephens Inc. in Dallas. “It was a wave of investors who had never touched the energy market before.”

They were following their usual playbook: buy the debt of companies in financial distress and hold onto it through a bankruptcy, converting the stake to equity and seizing control. Or, for private equity investors, buy unwanted assets or companies, replace the management teams and look for a buyer.

“For certain financially troubled producers wounded by the crash in 2015, some stakeholders may have given up hope that resurgent commodity prices will bail everyone out,” according to the Haynes & Boone oil and gas bankruptcy report for August. “For these producers, the game clock has run out of time to keep playing ‘kick the can’ with their creditors and other stakeholders.”

For Adam Flikerski, an important part of spotting winners is being immersed in Texas’ energy community. After starting his career in New York, he moved to Houston in 2006 to co-found Blackgold Capital Management LP, which specializes in energy investments and counts KKR & Co. as a shareholder.

A deal he is working on now came about because his daughter goes to school with the chief executive’s daughter. While the number-crunching is important, investors sometimes just need to know “who has the good rock” that will yield the highest production at the lowest cost, he said. His firm manages about $1 billion of assets.

Flikerski and other Texas-based professionals said the companies filing for bankruptcy this year never had great assets, or have capital structures that are unsustainable with oil in the $50 range.

Investing in the Permian basin requires not only understanding how to value assets and read reserve reports, but also how to drill wells properly, Getzler’s Haber said. One client who sought his help had invested in a pool of loans to companies that were having problems, including having drilled wells too close together and producing less oil than expected -- “too many straws in the Coca-Cola,” as he put it. Successful investment firms often have a geologist and reserve engineer on staff.

“There is a feeling that you can spreadsheet your way to success in your patch,” Haber said. “And I just don’t think you can.”

Even managers with previous energy experience found themselves struggling with some investments. The energy sector of the S&P 600 small-cap index has fallen more than 55% over the past 12 months, and energy companies are among the worst-performing junk bonds this year.

Blackgold’s Flikerski and other investors said that Fir Tree used its position in certain companies to push for cost cuts and asset sales -- notwithstanding the overall performance.

Overly ambitious projections for prices and production pushed some recently restructured companies, like Halcon Resources Corp., back into bankruptcy this year. Among Halcon’s large investors were Luminus Management LLC and Oaktree Capital Management LP, according to court documents. Both have offices in Texas.

“The lesson investors learned is that E&P companies should operate with little or no debt,” Louis Hanover, chief investment officer at Marathon, said in an emailed statement.

Five years ago, Justin Stolte, a mergers and acquisitions partner at Gibson Dunn & Crutcher LLP in Houston, was helping PE sponsors fund as many management teams as the firm could. Now, he’s undoing much of that work, but exiting Permian investments has been difficult since buying interest has dried up.

That has led to the rise of “smashcos,” in which a private equity firm will take two or more struggling companies and put them together, hoping to get the best combination of assets and management. The recent tie-up of Midstates Petroleum Co. and Amplify Energy Corp. is a frequently mentioned example.

Representatives for Midstates and Amplify didn’t respond to a request for comment.

“They say it’s like catching a falling knife,” Haber said. “They want no part of energy.”

(Updates return of S&P small cap index in the 17th paragraph. An earlier version corrected the spelling of the Haynes & Boone law firm)

--With assistance from Rachel Adams-Heard.

To contact the reporter on this story: Allison McNeely in New York at amcneely@bloomberg.net

To contact the editors responsible for this story: Rick Green at rgreen18@bloomberg.net, Nicole Bullock