The “tax free” part of the tax free savings account could be in question for Canadians with hyper-active TFSAs.

The Canada Revenue Agency (CRA) has revealed it has been reviewing millions of dollars in tax savings from traders who might be considered businesses. TFSAs were introduced nearly a decade ago to allow individual Canadians to invest and not have to pay any tax on the gains. As the total limits on TFSAs grow there are concerns professional investors are using their TFSA’s as a tax dodge.

Investment gains generated outside a TFSA are subject to taxation. The problem is: the CRA has no formal distinction between an individual and professional investor.

Kim Moody, director with Moodys Gartner Tax Law LLP in Calgary, says some of his clients are feeling the wrath of the taxman. “Our firm has a number of cases where the CRA is taking an aggressive stance on that issue. There are no clear guidelines on how to determine whether the TFSA is in the business of trading securities” he says. 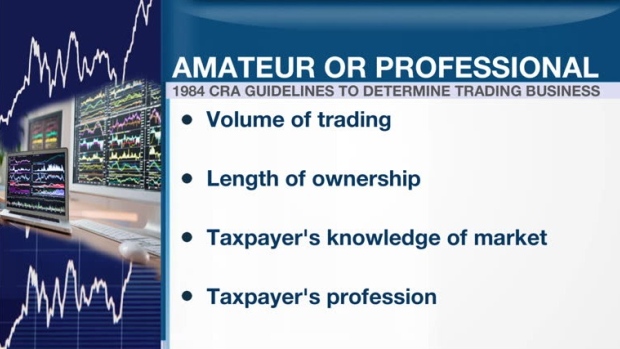 Moody says when pressed, a CRA official recently pointed out a document from 1984 that outlines the factors the CRA uses to determine an investment business. They include: volume of trading, the length of ownership of securities, the taxpayer's knowledge of the stock market, the taxpayer's profession, the time spent on researching and trading securities, and whether the taxpayer markets his or her ability to trade securities.

“It's a decent starting point but by no means conclusive nor complete. The problem with this is that anyone who has had some decent ‘wins’ in their TFSA – especially large ones – are presumed to be carrying on a business. That is too simplistic and is leading to great frustration, uncertainty and reassessments” he says.

His advice for any TFSA trader looking for clarity is to talk to a tax professional.