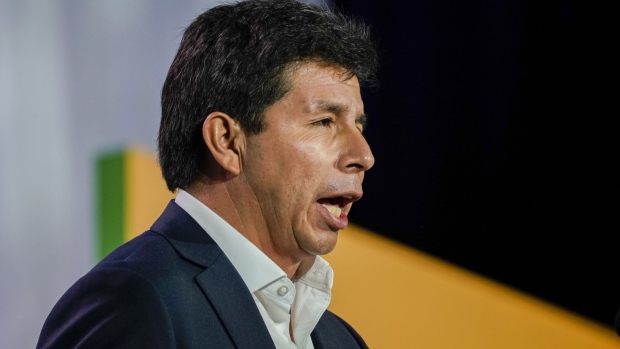 (Bloomberg) -- Peru’s President Pedro Castillo said that he’ll name a new cabinet after accepting the resignation of his latest prime minister, the fourth in 16 months in office, a sign of the country’s deepening political impasse.

Prime Minister Anibal Torres quit after the opposition-held congress on Thursday rejected a vote of confidence he presented, arguing that it interfered with the body’s powers. Torres said the vote was designed to discipline the chamber as a confrontation with the government had reached breaking point.

Castillo, in a speech Thursday night posted on Twitter, denounced what he called the “flat rejection” of congress, thanked the prime minister for his work and said he would appoint a new cabinet.

He also said he considered the decision by congress a clear “rejection of confidence,” a move that according to Peru’s constitution could open the door to dissolve the unicameral body if it’s repeated.

“The government is now one step from being able to close the congress,” he said.

Yet Congress President Jose Williams rejected the interpretation that the legislature’s decision meant an overall censure on the government and warned the president against attempting to shut the chamber.

“To do so would lead to an unconstitutional dissolution of the congress,” he said Friday in a tweeted video rebuttal of Castillo’s speech.

The Peruvian sol declined 0.2% at 3.86 per dollar, trimming part of the losses seen at the market. The nation’s dollar bonds traded mixed.

The Andean nation’s political crisis will continue to fester for weeks as congress will probably seek clarification on the reach of its decision by Peru’s Constitutional Tribunal.

Former rural schoolteacher Castillo has changed dozens of cabinet ministers since taking office in July 2021, with Torres being his fourth prime minister and the one who lasted the longer.

The drama comes days after a body from the Organization of American States, or OAS, visited Peru to assess the crisis, which has already led to two failed attempts to impeach Castillo.

--With assistance from Maria Elena Vizcaino.

(Adds statement by head of congress in eighth paragraph.)