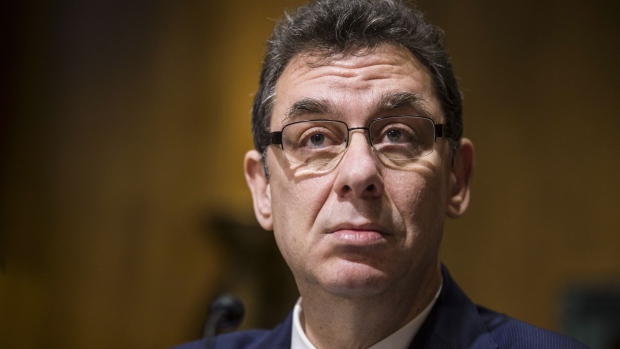 Albert Bourla, chief operating officer and chief executive officer of Pfizer Inc., listens during a Senate Finance Committee hearing on drug pricing on Capitol Hill in Washington, D.C., U.S., on Tuesday, Feb. 26, 2019. Top executives from seven of the world's biggest drug companies are testifying before Congress to talk about drug costs, a long-awaited session that could kickstart legislation to rein in prices. , Bloomberg

The overall pay package, which included salary, bonus, stock and other incentive pay, represented a 17% increase from Bourla’s compensation in 2019, when he was paid a total of $17.9 million, according to a securities filing on Friday.

Bourla has become the highly visible face of a company at the center of global efforts to halt the Covid-19 pandemic. The vaccine that Pfizer developed with German partner BioNTech SE was found to be 95% effective against the virus in a clinical trial, and it has become a crucial part of immunization efforts in the U.S.

At the same time, Bourla has been presiding over a broader effort to shift Pfizer’s emphasis to innovative treatments for cancer and other diseases. The company last year combined its Upjohn business, which included older blockbusters like erectile dysfunction medication Viagra and cholesterol fighter Lipitor, with generic-drug maker Mylan NV to form a new company called Viatris Inc.