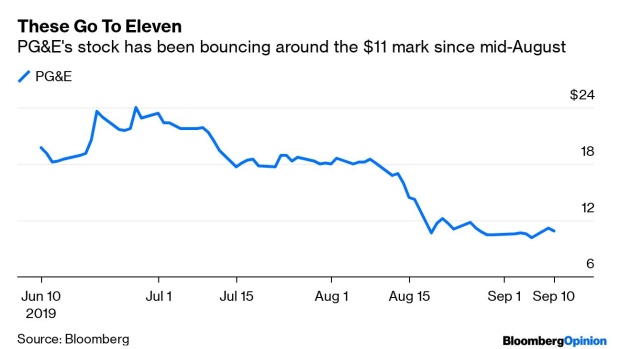 (Bloomberg Opinion) -- Ostensibly, a lot has happened with PG&E Corp. this week. It emerged that San Francisco Mayor London Breed had offered to buy the city’s power grid from the utility. Then, PG&E filed a reorganization plan to emerge from bankruptcy. This all seems pretty important.

It hasn’t registered with the stock. Having had a day or so to absorb the late-Monday court filing and a couple of days to mull Mayor Breed’s offer, the stock trades around the $11 level it’s been at for a few weeks.

That makes sense. San Francisco’s proposal is like someone showing up at your hospital bed and offering to buy the bed. The $2.5 billion being proposed wouldn’t even cover 10% of the high end of estimated liabilities PG&E faces. In return, the company would give up its network in the second-largest city (by population) in its service territory; a city that is also wealthy, growing and doesn’t face serious wildfire risk, making it relatively more valuable.

Apart from the company, the bankruptcy court and PG&E’s claimants aren’t likely to be thrilled about this either. Labor isn’t. State regulators and politicians should also be wary, as removing San Francisco could leave the remaining PG&E with that delicious cocktail of higher risk premium and fewer resources (see this).

If that buyout proposal looks DOA, PG&E’s reorganization plan looks more TBD. This proposes raising up to $14 billion in new equity mostly via a rights issue, with some existing shareholders attaching backstop commitments. In lieu of a detailed capital structure for the emerging entity, it came with a clutch of letters from major banks such as Barclays Plc and Goldman Sachs Group Inc. expressing confidence they could arrange tens of billions of dollars of debt and equity finance for PG&E’s exit.

The most controversial aspect, and the one that renders it all a bit moot at this point, is the plan’s cap on wildfire victims’ liabilities at $17.9 billion. As it was, CreditSights analysts were estimating liabilities north of $20 billion – and that was before the bankruptcy judge ruled last month that victims of the Tubbs Fire in 2017 could seek a jury trial to determine PG&E’s potential liability. Prior to this, a finding by CalFire, the state’s Department of Forestry and Fire Protection, that PG&E’s equipment wasn’t responsible for that fire led many to assume the company was off the hook. Now it could face potentially billions more in liability.

Suffice to say, with the equity backstop contingent on the $17.9 billion cap and no more big fires, and the banks’ letters expressing confidence rather than binding commitment, the current plan looks more like a placeholder.

Of course, this is a negotiation, and PG&E has to signal progress with a first draft of some sort to keep control of the process. But the cap on liabilities has drawn the anger of victims’ lawyers already. This matters in particular because PG&E’s filing still expresses the possibility of gaining legislative approval early next year to issue so-called Wildfire Victim Recovery Bonds. These would securitize a portion of future profits to fund payouts, thereby enabling shareholders to take only a temporary hit to value rather than permanent dilution from straight equity issuance. However, PG&E has failed once already on this front in Sacramento. It will be all too easy for opponents to fight the next push if they can point to a plan that covers bondholders and shields equity holders to a degree but caps payouts to victims.

All of which means that, for all the noise, the balance of risk hasn’t changed. PG&E still faces pressure from rival plans, especially the big equity check being dangled by the Ad-Hoc Committee of Unsecured Bondholders. The uncertainty attached to the Tubbs trial and the potential for dilution loom large. Plus, this will all play out against the backdrop of California’s current wildfire season, with the northern part of the state displaying “above normal significant fire potential” this month.

Back in late June, PG&E’s stock hit a summer peak of almost $24 on hopes that a mixture of state help and securitization would shield investors. As I wrote then, however, the reality is that PG&E needs a lot of new capital, and equity tends to take the hit in that situation. Three months on, the exact path out of Chapter 11, and what that will mean for its shares – which have fallen by more than half – remains murky. Having bought the rumor over the summer, there seems little rationale for buying the news now.