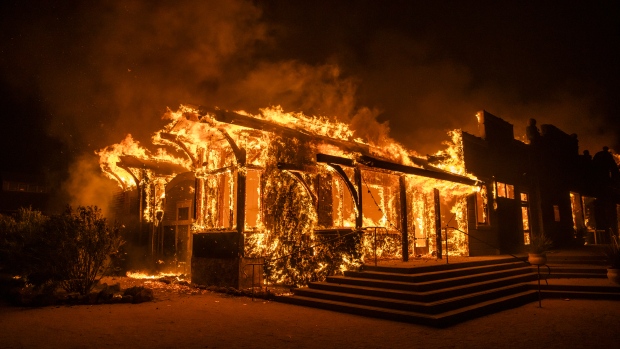 Flames engulf a burning building at the Soda Rock Vineyards during the Kincade fire in Healdsburg, California, U.S., on Sunday, Oct. 27, 2019. , Phil Pacheco/Bloomberg

PG&E Corp. has begun restoring electricity to the almost 3 million Californians who lost power this weekend in the state’s largest deliberate blackout ever. Any respite, however, may be short.

As the bankrupt utility began inspecting power lines for damage from wind storms sweeping through the northern part of the state, it warned that another round of gusts could spur more shutdowns Tuesday. Much of the region remained in the dark as of Sunday evening, including in the San Francisco Bay Area, and some customers who lost electricity may not see their power restored from the initial outage until later the week.

“This one’s going to be tight,” Andy Vesey, chief executive officer of PG&E Corp.’s utility, Pacific Gas and Electric, said at a press conference Sunday. “I urge all of you to ensure you are prepared for the fact that your power may not come back.”

The company, driven into bankruptcy by two years of wildfires sparked by its equipment, took the unprecedented step of shutting off electricity to 965,000 homes and businesses across Northern and Central California on Saturday and Sunday, as a wind storm packing gusts above 90 miles (144 kilometers) per hour raked the state. Another 100,000 customer accounts -- representing about 300,000 people -- lost power as the winds tossed tree limbs into power lines. The storm was expected to pass by early Monday.

The scope of the current blackout was historic, with 38 of California’s 58 counties expected to be affected. The largest number of shutoffs were in Sonoma County, where the Kincade fire triggered a massive exodus Saturday and Sunday. With that blaze and others burning, Governor Gavin Newsom declared a state of emergency.

Power was knocked out in heavily populated areas including Oakland and Berkeley, and almost all of the affluent Marin County north of San Francisco. While the city of San Francisco itself was spared, many of the workers in commuter towns were hit.

In the suburbs of Marin County, street lights were out, gas stations were closed and stores were shuttered. People who charged their phones and computers before the outage hit awoke to slow internet connections as they searched for updates. In Oakland, long stretches of banks, pharmacies, restaurants, shops and markets were dark. Police patrol cars parked at intersections to help navigate vehicles through darkened traffic lights.

PG&E said it would begin inspections in the rest of its blacked-out territory early Monday morning, returning electricity as quickly as possible. But while executives said they would try to restore power to everyone who lost it before the next blackout began, they warned that they might not have time. Some customers, they said, might stay in the dark for days.

The coming wind storm appears to be the last in the immediate forecast, according to PG&E meteorologists. Three have already struck this month.

“We’ve had rolling events, rolling events over and over and over again -- as soon as we clean one up we’re prepping for the next,” said Mark Quinlan, PG&E’s senior director of emergency preparedness and response. “And after this one, we kind of get back to normal, at least for a week.”

The shutoffs have triggered a debate over how far California is willing to go to prevent fires in an increasingly warm and dry climate. Despite the power cuts, blazes continue to burn.

The outages are extending to Southern California, where Edison International said 302,900 homes and businesses could face shutdowns. Sempra Energy’s San Diego Gas & Electric said it has no emergency shutoff plans at present.

Wildfires have broken out at both ends of California. The Tick blaze near Los Angeles forced tens of thousands of evacuations. And north of San Francisco, the Kincade fire is still raging. It had burned 54,300 acres, destroyed at least 94 structures and was threatening another 79,575 buildings as of Sunday evening. Almost 200,000 people were forced to evacuate.

“I’ve heard some people express concerns that we’re evacuating too many people,” Sonoma County Sheriff Mark Essick said Sunday. “I think those concerns are not valid at this point.”

The Kincade fire was reported minutes after a PG&E transmission line in the area malfunctioned late Wednesday. Firefighters have not determined the cause of the blaze. PG&E’s shares plummeted 31% Friday to $5, a record low. Shares of Edison fell 8.5% as fires burned in its Southern California service territory.

All told, there’s about $12 billion worth of property within a mile of the active fires, said Chuck Watson, a disaster modeler with Evenki Research.

The prospect of more liabilities from wildfires is especially vexing for PG&E. Since filing for Chapter 11 in January, the judge overseeing the case has warned that another big blaze would upend the utility’s bankruptcy and potentially wipe out shareholders. Any claims from new fires sparked by PG&E would have to be paid out first -- and in full -- before those from previous blazes get a dime.

The winds have also arrived at a precarious moment. California receives almost no rain during its summer, and a five-year drought earlier this decade killed millions of trees that can now easily ignite. Recent winds have dried out grasses and shrubs even further.