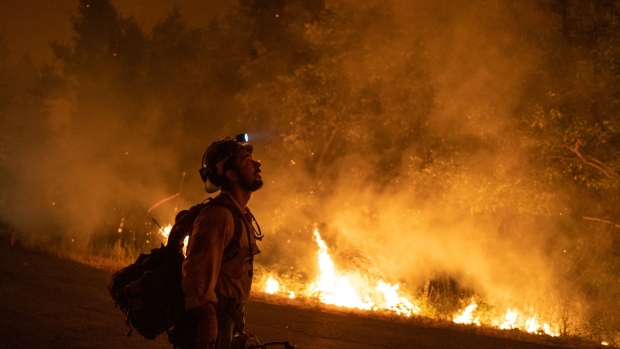 A firefighter uses a drip torch during the Mosquito fire near Volcanoville, California, US, on Friday, Sept. 9, 2022. The wildfire, which started Tuesday evening north of the Oxbow Reservoir, had burned nearly 34,000 acres by Saturday morning and remains 0% contained, making it one of the state’s largest wildfires of the season so far, reported the San Francisco Chronicle. , Bloomberg

(Bloomberg) -- PG&E Corp. was sued for causing California’s largest wildfire this year, less than two weeks after the utility told regulators about a power line failure near the time the fire reportedly started in the drought-parched Sierra Nevada foothills east of Sacramento.

The California utility told state regulators in a Sept. 8 filing that the US Forest Service had placed caution tape around a PG&E pole near where the fire is believed to have started.

The fire spread quickly and has charred almost 77,000 acres and destroyed 78 structures, according to the US Forest Service. It was 60% contained as of Friday.

Calfire, the state agency charged with preventing wildfires, and the US Forest Service “have not made a determination” about the cause of the Mosquito fire, PG&E said in an emailed statement, adding that the company remains “focused on reducing wildfire risk across our service area.”

PG&E likely will be able to cover damages related to the blaze through its insurance coverage. The utility can also tap into money from a state wildfire insurance fund if the fire causes more than $1 billion in damages.

Between the two forms of insurance, the most PG&E will have to pay in any given year is “a few hundred million,” said Gerald Singleton, managing partner at law firm Singleton Schreiber, which filed the suit. “And that is not enough to make a dent in their profit margin.”

Like other suits against PG&E over a spate of wildfires in recent years, the latest complaint cites the legal principle known as “inverse condemnation.” It holds that utilities can be held liable for costs if their equipment is found to have caused a fire -- even if the companies followed safety rules.

Inverse condemnation is related to the better-known concept of eminent domain, which requires the government to pay for taking private property.