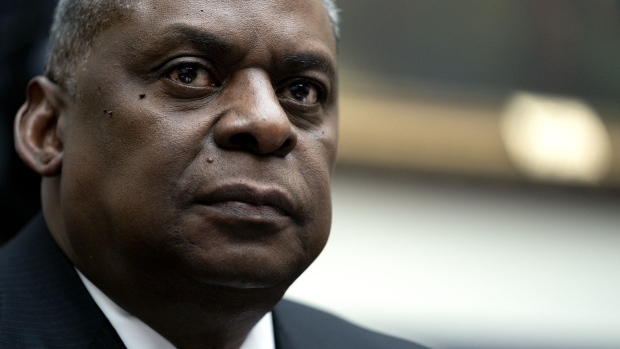 Lloyd Austin, U.S. secretary of defense, listens during a House Armed Services Committee hearing in Washington, D.C., U.S., on Wednesday, June 23, 2021. Top White House aides wrapped up a meeting with group of senators Tuesday without producing an infrastructure compromise, as differences on how to pay for a proposed $579 billion in new spending for roads, bridges and other projects continue to bedevil the talks. , Bloomberg

Duterte received Austin in a courtesy call at the presidential palace in Manila on Thursday night, where they had an “open and frank” discussion on the status and future direction of Philippines-U.S. engagement, according to a statement from Duterte’s office released Friday.

“They agreed that the alliance can be further strengthened through enhanced communication and greater cooperation, particularly in the areas of pandemic response, combating transnational crimes, including the war on illegal drugs, maritime domain awareness, the rule of law and trade and investments,” said the statement that came on the U.S. defense secretary’s first official visit to Manila.

Duterte last year moved to terminate the Visiting Forces Agreement between the two countries, which sets the terms for joint exercises and engagement of American soldiers in the Philippines. The decision, seen as a pivot toward China, was Duterte’s first significant effort to cut defense ties with the U.S.

However, the agreement has been repeatedly extended as tensions between the Philippines and China have escalated in recent months over disputed areas in the South China Sea. Backed by the U.S., Manila has protested the presence of Chinese vessels in contested waters, while Beijing has insisted their presence in the region is legitimate.

Austin has used his visit to Southeast Asia to reassure allies of the U.S.’s commitment to engage with the region, and to challenge what he described as China’s aggression.

The Pentagon chief’s second visit to the region as secretary comes at a time of mounting U.S.-China tensions and as countries across Southeast Asia struggle with a surge in coronavirus cases.