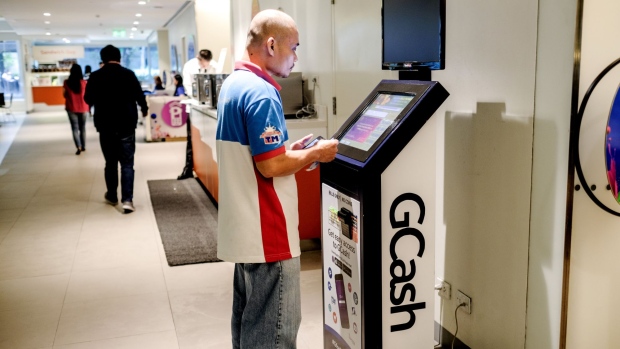 A customer adds credit to his mobile phone by using a Globe Telecom Inc. GCash top-up machine in Taguig city, Metro Manila, the Philippines, on Monday, Oct. 23, 2017. Globe is tapping its partnership with Chinese Billionaire Jack Ma’s Ant Financial for capital, expertise and technology, Cu said in an interview. , Bloomberg

(Bloomberg) -- Globe Fintech Innovations Inc. is considering a platform that will allow the tens of millions of users of its mobile wallet to invest in cryptocurrencies and local and global equities, its CEO said on Monday.

The company known as Mynt, valued at more than $2 billion after its latest fund-raising round, will grow its financial-service offerings and “double down on lending,” CEO Martha Sazon said in an interview with Bloomberg Television’s Rishaad Salamat and Yvonne Man.

A venture of Globe Telecom Inc. and Ant Financial Services Co., Mynt’s growth hinges on making its electronic wallet, GCash, a gateway toward other services like loan and investments for the millions of Filipinos who are financially underserved, she said.

The company is on track to hit 3.5 trillion pesos ($69.5 billion) worth of transactions by end-2021, Sazon said, adding that it reported four straight months of “positive Ebitda” and net income after tax. Mynt’s transactions reached 1 trillion pesos in 2020.

Shares of Globe Telecom have rallied about 60% this year, the fourth-best performer in the benchmark Philippine Stock Exchange Index, as investors put value on its fintech venture and demand for data stayed elevated.