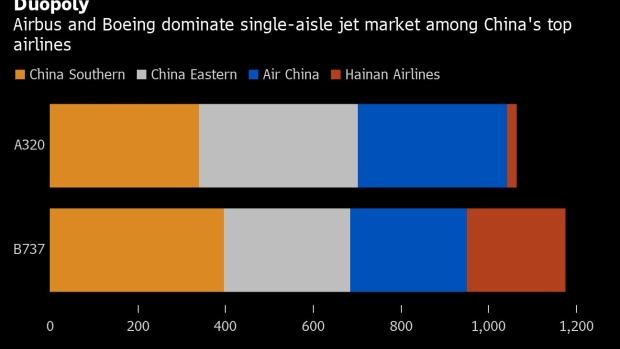 (Bloomberg) -- China appeared to certify a homegrown aircraft to take on Boeing Co. and Airbus SE in the highly lucrative market for narrowbody jets, according to photos of a Thursday ceremony that circulated on social media.

The photos show Commercial Aircraft Corp of China Ltd., or Comac, receiving type certification for its C919 from government officials. But in a break with US and European tradition, neither China’s regulator nor the manufacturer issued statements confirming that the jet had been formally approved to begin commercial service. A representative for the Civil Aviation Administration of China didn’t immediately respond to a request for comment.

The milestone, which comes ahead of a crucial party Congress next month, typically marks the end of flight-testing and paves the way for a planemaker to start deliveries. The event was attended by Liu He, China’s vice-premier and top economy adviser to President Xi Jinping, according to the photos.

“It is clearly positive for the C919 that they’ve finally certified it,” said Agency Partners analyst Sash Tusa. “It’s been very difficult to do because Chinese regulators are extremely risk averse. If they don’t get this right the implications in terms of loss of face for China is huge.”

China is angling to disrupt the dominance of Boeing and Airbus in commercial jetliner manufacturing. However, it’s not clear when, if ever, the C919 will be a competitive threat to the duopoly. Comac hasn’t attracted much interest for its products overseas, and the nation’s airlines still favor Airbus and Boeing as the workhorses of their fleets.

It’s been 14 years since Comac started developing the C919, using foreign suppliers including General Electric Co., Honeywell International Inc. and, for the engines, CFM International Inc. -- a venture between GE and France’s Safran SA. The project has been marred by delays and missed deadlines. China Eastern Airlines Corp. is the launch customer with an order for five of the narrowbody aircraft, which completed a first pre-delivery test flight in May.

Comac has said it already has 815 orders from 28 Chinese customers for the C919, though the majority aren’t confirmed and many are from aircraft lessors yet to place the jet with an airline. China’s so-called big three -- China Eastern, Air China Ltd. and China Southern Airlines Co. -- and Hainan Airlines have 2,241 Boeing and Airbus narrowbody aircraft between them, and at least 546 on order.

Comac hasn’t provided details on its production figures, and no major Chinese carrier apart from China Eastern has referenced the C919 in fleet plans.

The homegrown aircraft program will have to contend with the dominance of Airbus and Boeing in the Chinese market. In July, Airbus sealed one of its biggest orders ever, with four Chinese airlines signing up to buy 292 aircraft in a deal worth some $37 billion.

Boeing, meanwhile, has seen its business slow in China. With relations strained Washington and Beijing, the US manufacturer’s 737 Max still hasn’t been allowed to return to commercial service in the country even though a global grounding after two crashes in 2018 and 2019 has been lifted in almost every other market. Boeing and China’s aviation safety agency recently met to discuss updating pilot training materials in a sign the Max may finally be resuming flying in the country after a three-and-a-half year freeze.

Comac’s next challenge is to get a global supply chain working in sync as it gradually starts production. Aviation analyst Richard Aboulafia predicts it will face an “incredibly painfully slow production ramp” based on the manufacturer’s struggles to produce the jet’s predecessor, the ARJ21.

For now, the plane will only be allowed to fly within China until it is certified by foreign regulators. The US Federal Aviation Administration declined to comment, directing questions to Chinese regulators. Normally, the FAA would review the design of another nation’s jet to certify it for use in the US, but it’s unclear how that will proceed in this case with the current tensions in relations between the two countries and China’s lack of action on restoring the 737 Max to service.

A spokeswoman for the European Union Aviation Safety Agency said that EASA has been working for several years with Comac and the Chinese regulator but “cannot comment on the date when this validation would be completed (or indeed on the date when the CAAC may issue its certification).”

Airbus and Boeing forecast demand for 8,400 aircraft from Chinese carriers over the next 20 years, most of which are single-aisle jets. Airbus Chief Executive Officer Guillaume Faury said last summer that he expects China to become a legitimate rival in global planemaking by the end of the decade.

“There will be a long way to go undoubtedly. People know that -- the participants, Comac, Chinese airlines, Chinese lessors,” said Gang Li, CEO of Beijing-based aircraft lessor AerDragon, noting that Airbus took decades to catch and overtake Boeing globally. But “if anyone can break the two-supplier dominated world, it will be China.”

(Writes through with additional context on Comac, planemaking duopoly.)