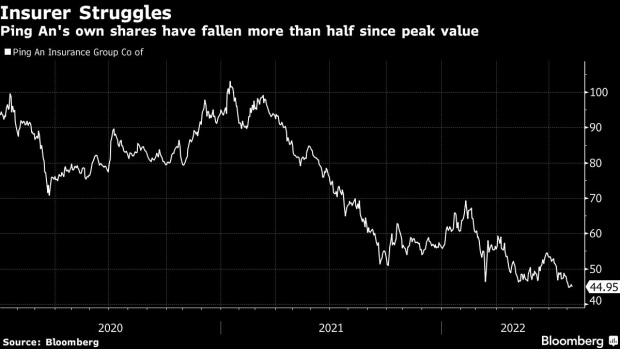 Investors hold placards ahead of an HSBC Holdings Plc informal shareholders meeting in Hong Kong, China, on Tuesday, Aug. 2, 2022. HSBC executives and directors is meeting investors today amid calls by Ping An Insurance Group Co., its largest shareholder, to split up the lender. , Bloomberg

In the past three years, the 66-year-old chairman of China’s biggest insurer has slashed more than 800,000 roles, or 60% of his army of life insurance agents, in a painful reform to boost productivity and restore value for Ping An Insurance (Group) Co. He’s repeatedly restructured the company he built over three decades, shuttering unpromising businesses and striking out into new areas, in his pursuit of growth.

Now Ma’s set sights on splitting up Europe’s largest bank, HSBC Holdings Plc, where Ping An has a major stake. Concern about the lender’s ability to handle geopolitical risk -- it’s based in London but counts Hong Kong as its biggest market -- and disappointment in its business performance sit at the heart of Ping An’s push, according to a person familiar with the insurer’s thinking, who requested not to be named because the matter is private.

From behind the scenes, Ma has set in motion a tussle that’s fired up retail shareholders in Hong Kong, a third of HSBC’s investor base. The schism with the bank’s management dovetails with Beijing’s tightening grip on the former British colony.

“This public rift is more than uncommon, it’s unique,” Michael Sheridan, author of “The Gate to China, a new history of the People’s Republic and Hong Kong.” “To see a giant Chinese insurer taking on the dominant bank in Hong Kong signifies a tactical change with huge implications. This is not purely about money, it’s about power and who rules the financial landscape in China’s international gateway.”

For its part, HSBC has pushed back, most recently at a chaotic shareholder meeting in Hong Kong where protesters held up placards in support of Ping An’s stance. Chairman Mark Tucker and Chief Executive Officer Noel Quinn argued that an Asian carve-out plan was unworkable and posed a major risk to the company. It would also put Hong Kong’s place as a global financial center at risk, Quinn warned.

On Thursday, a person familiar with the insurer’s thinking said HSBC was overstating the challenges of a spinoff, and was in urgent need of radical change.

A closer look at Ping An’s reticent chairman provides clues on what Ma envisions for the 157-year-old lender.

The son of People’s Liberation Army officers, Ma never received a college degree due to the Cultural Revolution that disrupted China’s education system. He learned English by memorizing the dictionary, and built Ping An into the world’s second-largest insurer from scratch. He designed almost all its new businesses, often beginning with sketches of business models, like how he played with self-made toys during his childhood.

Since founding China’s first joint-stock insurer in 1988, Ma has built it into a financial conglomerate spanning insurance, banking, and asset management. Ping An has incubated and listed unicorns worth billions and is seeking to transform itself into a technology giant comparable to Huawei Technologies Co. and Tencent Holdings Ltd.

His romance with HSBC began in 2002, when the British lender bought a 10% stake in the Chinese insurer. HSBC sold out in 2012, after helping Ping An build its back-office platform and improve risk management. Five years later, Ping An disclosed it held a 5% stake in HSBC, switching the relationship. When the lender’s stock hit a 25-year low in 2020, Ping An raised its holding to 8%, helping put in a bottom.

HSBC’s Tucker once asked Ma, who he’s called an old friend, why Ping An kept pushing the boundaries. A “sense of crisis,” Ma responded. The comment fits with what people who know him describe as an obsession for change, a perpetual sense of crisis, and an ability to execute on plans.

Despite the close relationship, differences rooted in the companies’ cultures have grown more apparent over the past decade, the person familiar with the firm’s thinking said, adding that Ping An was particularly disappointed by HSBC’s underperformance compared with other Asia-focused banks and a suspension of dividends during the pandemic.

It also worries about the geopolitical hazards. Given HSBC is based in London and mainly regulated by in the UK, it’s susceptible to risks as western countries and China decouple, the person said.

Tensions grew after Ping An’s input was brushed aside by HSBC, despite it holding the largest stake, the person said.

On Aug 9, Hong Kong government’s advisory Executive Council convenor Regina Ip said that she “definitely” wanted HSBC to be headquartered in the city, a 2015 proposal that was once reviewed but vetoed by the bank.

Ping An drew the spotlight in 2012 when the New York Times reported that former Chinese Premier Wen Jiabao’s relatives once acquired shares in the firm after an appeal by the insurer to authorities averted its breakup following the Asian financial crisis. Ma emerged from the incident unscathed.

More recently, Ping An’s stock has dived more than 50% from a 2021 high, fueled by a botched real estate investment, Beijing’s technology crackdown that hit the value of its spinoffs and a slumping life insurance business. That’s added urgency to the need to squeeze value from one of Ma’s biggest bets.

The insurer is keen to bolster shareholder return at HSBC, and is flexible on the approach -- possibilities include a breakup of HSBC’s Asia business or just the Asia retail operations, the person said. The spinoff can remain part of HSBC to leverage its global back office operations through internal agreements.

In response, the bank has set out 14 reasons why changing its structure was a bad idea, ranging from the length of time it would take - the bank reckons as long as five years - to the loss of direct access to US dollars.

HSBC’s latest earnings report and shareholder meeting offered little to appease Ping An. Asia’s contribution to pretax profit climbed to nearly 70%. In Ping An’s view, that bolstered Ma’s case to spin off the region’s business and capture growth in China, the person said. The insurer’s leadership also thinks HSBC management has yet to provide a long-term solution to deal with geopolitical risks, the person added.

Ping An remains focused on persuading HSBC to give shareholders a vote on the spin off of its Asian operations as a Hong Kong-listed and headquartered standalone business, a person familiar with the matter had said following the investor meeting. It estimates a spinoff would generate additional market value of $25 billion to $35 billion, release $8 billion in capital requirements, and save on headquarter and infrastructure costs, the person said on Thursday.

For now, it remains to be seen whether Ma’s campaign will be successful. But even if he ultimately fails to convince HSBC and its investors to back a spinoff, the episode may bring renewed urgency to the bank’s efforts to improve shareholder returns, said Mak Yuen Teen, a professor at he National University of Singapore, who researches corporate governance.

“In HSBC’s case, management has raised some valid points against a spinoff,” Mak said. “Nevertheless, such a campaign could push the board and management to do a fundamental review of its business and may not be a bad thing.”