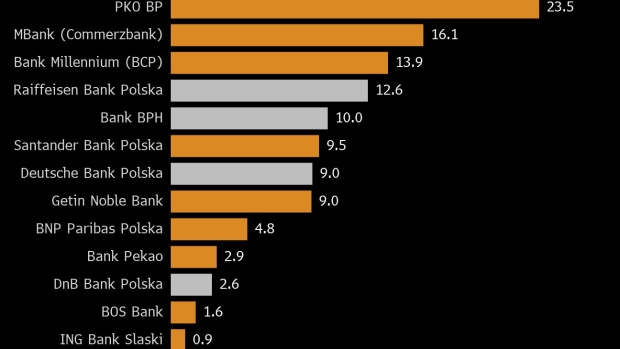 The proposal for out-of-court deals urged by the financial regulator KNF won’t guarantee a systemic resolution of Swiss franc mortgages and could leave banks open to legal challenges, the Austrian lender said on Monday.

The move by Raiffeisen, which still has 9.5 billion zloty ($2.6 billion) of Swiss-franc home loans despite selling its Polish retail operations in 2018, could embolden other lenders to leave the talks, putting the entire plan in jeopardy, according to analysts.

Led by PKO Bank Polski SA, the industry has been trying to thrash out a blueprint for out-of-court settlements that would end a decade of legal battles. Yet the one-off hit from converting loans into zloty could overwhelm some banks, while dragging the cases through Poland’s notoriously slow courts would allow to spread the pain over time.

“We are concerned that Raiffeisen is not the only bank that decided not to participate in the proposal,” Kamil Stolarski, an analyst at Santander Bank Polska SA, said in a note on Monday.

If lenders including General Electric Co. and Deutsche Bank AG, which also manage their mortgage portfolios despite leaving Poland, were to follow Raiffeisen, the total value of loans excluded from the settlements could reach 34.2 billion zloty, or 29% of the total, according to Bloomberg calculations.

That ratio could rise to 37% were Getin Noble Bank SA to join the holdouts.

The emerging disagreement would pit smaller lenders against PKO BP, the industry’s largest player. The state-owned bank is already testing potential settlements with clients and wants to end the legacy of its Swiss-franc mortgage lending this year. It also has enough capital to absorb the hit from loan conversions.

Years of court battles have forced Polish banks to boost provisions for legal costs related to Swiss loans forcing Commerzbank AG-owned mBank SA into a loss in the fourth quarter. Getin Noble said earlier this month that its capital adequacy ratio would fall below the minimum-required level due to additional provisioning.

Some regulators, including consumer protection agency UOKIK may also raise their objections if not enough banks participate in the settlement deal and clients of individual financial institutions are treated differently, said Stolarski. UOKiK’s spokesperson didn’t have any immediate comment.