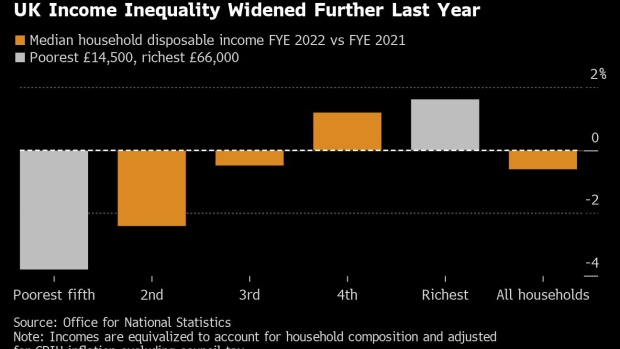 The poorest fifth of households suffered a 3.8% slump in median disposable income in the financial year through March 2022 as benefit payments and wages failed to keep up with growing inflationary pressures.

The figures show how the squeeze is deepening inequality in Britain as a stark divide opens up between the highest and lowest-income households. They also expose the struggle to improve living standards since the Brexit vote in 2016 as the UK’s dismal economic performance weighs on wages.

Overall median incomes fell 0.6%, with worse to come as inflation accelerated to four-decade highs. However, the richest fifth enjoyed a 1.6% increase compared to a 3.8% slump for the worst off and a 2.4% drop for the second-poorest fifth of households.

By the end of the period covered by the figures, inflation had accelerated to 7% but had hit double-digits by the summer.

In the latest year, the gap was driven by wages and salaries, which fell 7.5% for the poorest households and increased by 7.8% for the richest.