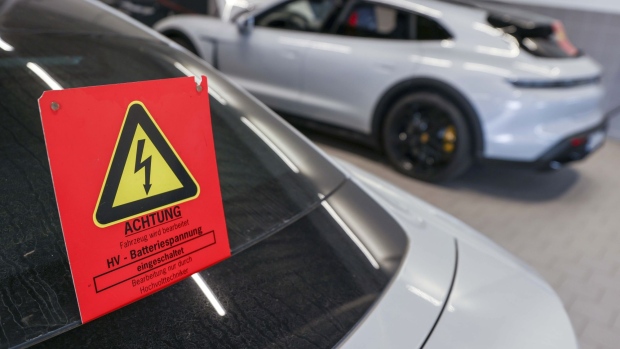 A high voltage warning sign on a Porsche Taycan electric vehicle (EV) during a workshop update at the Porsche SE dealership in Dortmund, Germany, on Wednesday, Sept. 7 2022. Volkswagen AG is pushing ahead with its plan to list a minority stake in the Porsche sports-car maker despite gyrating markets, paving the way for what could be one of Europe's biggest initial public offerings. , Bloomberg

“We expect the Porsche IPO to price at the very high end, if not slightly above the stated range,” analysts including Philippe Houchois wrote in a note to clients Monday, citing discussions with investors as well as press reports.

Market interest is high, they added, while noting that more than 40% of the offering is already allocated to anchor investors.

Porsche’s listing -- despite some analyst skepticism -- is injecting fresh life into the European IPO market. Firms have raised less than $10 billion ($10.3 billion) in IPOs this year through August, an 83% drop in proceeds from the same time last year, according to data compiled by Bloomberg.

Jefferies’ comments follows analysts from HSBC Holdings Plc and Canaccord Genuity Ltd.’s Quest balking at the deal’s price. Volkswagen, the German group which owns the Porsche sports car brand, is seeking a valuation of 70 billion euros to 75 billion euros ($67.7 billion to $72.5 billion). Quest said Friday it might be worth just two thirds of that.

The stock traded at 89 euros a share in unregulated gray market trading at 11:30 central European time Monday. The shares are being marketed to investors at 76.5 to 82.5-euros apiece. Early price indications, while encouraging, are no guarantee of a rally.