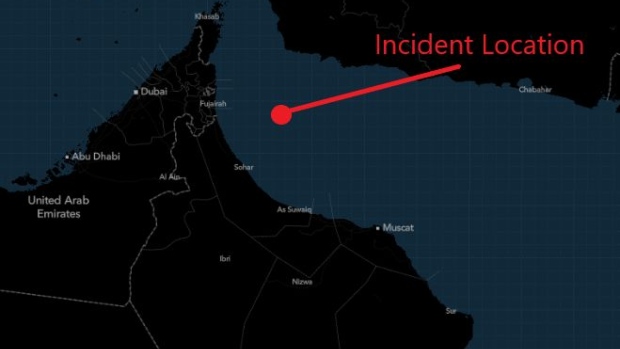 UKMTO says an 'incident' is underway in the Gulf of Oman , via Bloomberg

(Bloomberg) -- A potential hijack of a ship in a major Middle East shipping route has ended, the British Navy said Wednesday, days after a deadly drone attack on a tanker in the same area that the U.S and its allies blamed on Iran.

The events have stoked tensions in and around the narrow waterways of the Persian Gulf which are vital for the world’s oil markets.

The U.S. vowed a “collective response” to last week’s strike on an Israeli-operated vessel, which killed a Romanian and a Briton, as Tehran denied involvement. The Financial Times reported that Washington is “moving forces” into the region to investigate the attack, citing a U.S. defense official. Bloomberg wasn’t immediately able to confirm the report.

Shipping attacks have escalated in recent years amid tensions between Iran and the U.S. and its Israeli ally but fatalities are unusual.

The incidents come at a sensitive time for the region and Iran, which confirmed an ultraconservative new president on Tuesday and is weighing when to reenter stalled talks with world powers over its controversial nuclear program the West believes could help deliver Tehran a bomb. The U.S. wants to engage in the diplomacy and is seeking to renter a 2015 nuclear deal which would limit the atomic work in return for sanctions relief.

As speculation over possible retaliation to Thursday’s strike swirled, unidentified people boarded a vessel in waters roughly halfway between Iran and the United Arab Emirates, according to the U.K’s Maritime Trade Operations, a naval service that monitors regional shipping.

On Wednesday, it said those boarders had left the unnamed vessel. The U.S. Navy’s Fifth Fleet, which polices the waters, said it was aware of events and was coordinating with regional partners, but no American vessels were involved in the response.

Shipping publication Lloyd’s List identified the ship as the Panama-flagged Asphalt Princess. Bloomberg was unable to contact the ship’s Dubai-based owner or confirm the report. Saeed Khatibzadeh, spokesman for Iran’s Foreign Ministry, denied that Iran’s forces boarded ships in the Persian Gulf and Sea of Oman on Tuesday and warned against “rumors and the fake news of Western and Zionist media.”

The U.K. told the United Nations Security Council that Iran was probably behind last week’s drone attack, a first step in bringing the issue before the world body.

“Initial assessments by the U.K. and international partners, shared by Romania, concluded that it is highly likely that” the merchant vessel Mercer Street was attacked by “Iran off the coast of Oman using one or more Unmanned Aerial Vehicles,” missions from the U.K., Romania and Liberia wrote in a letter to the council seen by Bloomberg.

It’s unlikely, though, that the U.K. and allies, including the U.S., can win support for a statement blaming Iran in the 15-member Security Council, where nations including Russia and China have veto power. Israel said earlier it had given allies “hard evidence” that Iran was behind the hit.

In its own letter to the Security Council, Israel’s UN Ambassador Gilad Erdan said the latest attack is “yet another instance of maritime terrorism undertaken by Iran on the high seas, similar to other recent attacks that I have already brought to the attention of the Security Council, asking that concrete action be taken.”