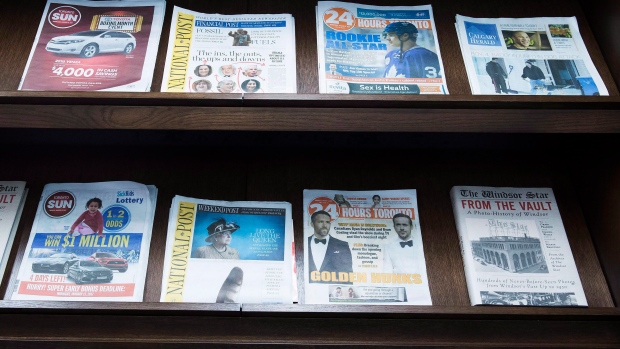 Postmedia newspapers are on display during the company's annual general meeting in Toronto on Thursday, January 12, 2017. , THE CANADIAN PRESS/Nathan Denette

Postmedia's third-quarter revenue included $32.9 million from its digital businesses, such as websites and marketing services -- up 10.1 per cent from last year's third quarter.

Advertising revenue on digital platforms was up 12.2 per cent from a year ago, which Postmedia chief executive Andrew MacLeod said marked the 10th consecutive quarter of double-digit growth in digital ad revenue.

"I don't see a lot of other participants in our marketplace who have managed to do that," MacLeod said in an interview after Postmedia's quarterly conference call.

Nevertheless, MacLeod said, "we need that to continue and we need that to accelerate because we have a legacy business that's larger and it's in decline."

MacLeod said Postmedia has been using various means -- operational cost cutting, sales of real estate and other assets and government tax credits -- to prolong the life of its legacy business.

Postmedia estimates that it will eventually qualify for between $8 million and $10 million per year for five years from a new federal program that's designed to pay some of the labour costs for qualifying journalists, he said.

But MacLeod said the exact timing and details of the federal government's funding have yet to be worked out.

In last year's fiscal third quarter report, Postmedia said it had received $20.4 million from a now-ended Ontario digital media tax credit for the period from September 1, 2012 to April 23, 2015.

MacLeod said media companies generally need the assistance to transition to digital publishing because so much advertising revenue has been captured globally by Google and Facebook.

"Our rate of decline tends to be pretty consistent with what the industry's facing. We do everything we can to support (the legacy) business but there's an . . . an inability to control what's occurring in an industry that's in a structural decline," MacLeod said.

He added that Canadian private sector media companies have an additional problem -- competition from the Canadian Broadcasting Corp. and, to some extent, Canada Post.

"That's pulling revenue out of the ecosystem that private corporations would otherwise be going after. So I would encourage Ottawa to think about having the CBC emulate the BBC, where they don't take paid advertising."