It was one of the worst weeks for the legal cannabis sector since pot became legal in Canada.

After more than a dozen Canadian-based pot companies reported quarterly results over the past five days, it became increasingly clear the risks that had faced the industry have manifested themselves, resulting in what one analyst described as a “bloodletting.” A lack of legal retail stores, notably in Ontario, combined with a glut of cannabis held by provincial wholesalers and a decline in prices, led to a series of disappointments for investors.

The results were staggering: Half of those companies - including leading producers Canopy Growth Corp. and Aurora Cannabis Inc. - reported sequential revenue declines, and no publicly-traded company was immune from a broad investor selloff in the space. The top five cannabis companies on the market – Canopy, Aurora, Aphria Inc., Tilray Inc., and Cronos Group Inc. – saw a total of $5 billion in market capitalization disappear, according to Bloomberg data.

“What you’ve seen is a market that is uncertain on where to go from here,” said Michael Singer, executive chairman of Aurora Cannabis, in an interview with BNN Bloomberg.

Analysts widely believe that the worst isn’t over, despite the upcoming launch of next-generation cannabis products in December. Pot companies are betting ‘cannabis 2.0’ will bring greater revenues than what the gains they have seen in the first year of legalization. 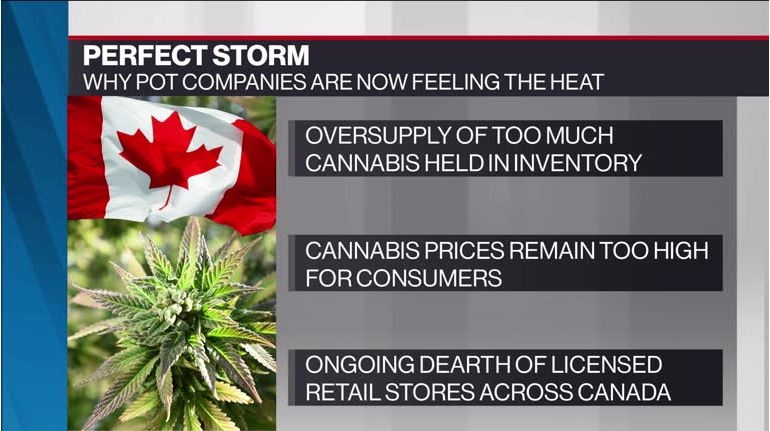 Het Shah, managing director for New Leaf Data Services, a cannabis data consultancy, said that the major producers’ results show that cannabis consumption in Canada is not keeping pace with the accelerated growth in supply. Shah told BNN Bloomberg in an interview the total amount of cannabis produced in the quarter by the big four producers reporting this week - Tilray, Cronos, Aurora, and Canopy – rose nearly 20 per cent, while sales volumes only increased 5.6 per cent.

“This makes us believe that more product is being pushed to storage and eventually will have to be written down,” Shah said.

Nearly every cannabis producer cited lack of physical pot shops - 24 to date - as not providing nearly enough real estate space to meet consumer demand in the country’s biggest marijuana market. Canopy Growth Chief Executive Officer Mark Zekulin said he assumes Ontario will open up the licensing process as early as January and expects 40 new stores will open their doors per month, despite no such announcement having yet been made by the provincial government.

“We truly believe the challenges faced here in Canada are short term. Stores will come. Cannabis 2.0 will come. Provincial accumulated inventory is getting to the right spot,” Zekulin said in a phone interview with BNN Bloomberg. “If we’re a little bit delayed, through adjustments we’ll still be able to meet our objectives.”

However, even if store licences were granted at a quicker pace, it still wouldn’t justify some of the valuations major pot companies are trading at, according to Rahul Sarugaser, an analyst at Raymond James.

“The Canadian market is not big enough to warrant the valuations, particularly of the big five [producers],” Sarugaser said in a phone interview with BNN Bloomberg. “These multi-billion dollar valuations cannot lean on just the Canadian market.”

To keep cannabis flowing to consumers while competing with a still-thriving black market, producers have drastically lowered the price of their pot. Both Tilray and Cronos have slashed their price-per-gram by almost half, while Village Farms International Inc. - a produce maker which has quickly emerged as a leading low-cost producer of cannabis - slashed wholesale prices from $4 to $2 per gram in its latest quarter.

Zekulin said Canopy pays close attention to consumer behaviour and pricing, noting the company just launched its value brand called “Twd.” However, he stated there could be some “artificial impact“ caused by the retail shortfall in Ontario that may be skewing the price of cannabis on the open market.

“We’re not in a growing demand situation,” he said. “It’s hard to draw conclusions on medium-to-long-term pricing based on that.”

Ashley Chiu, a manager at Ernst & Young who specializes in the cannabis sector, said that licensed producers likely took advantage of the jubilation at the onset of legalization last year and were able to convince wholesalers to let them set prices much higher than what the black market offered.

“Given the shortage of legal products at the time, producers may have been able to get away with that,” Chiu said in a phone interview with BNN Bloomberg. “Now, these prices are coming down as a function of supply and demand.” 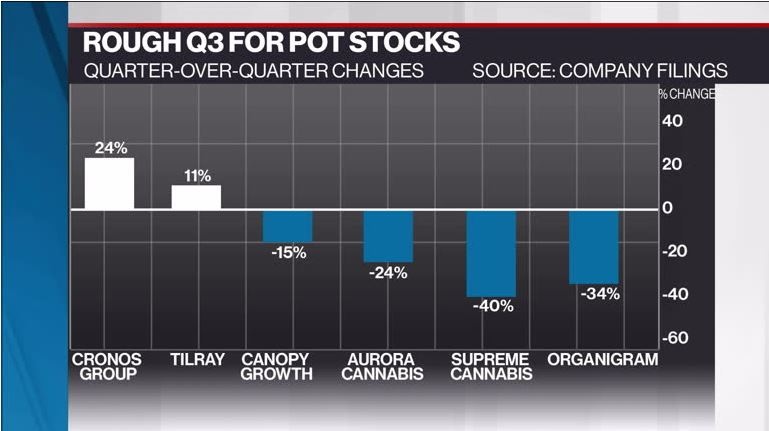 With a disastrous third quarter in the books, some analysts are now coming up with cannabis company “dead pools” to identify which companies will still be around in another year. Mackie Research said in a recent research report that 21 out of 50 publicly-traded cannabis companies the firm analyzed have less than six months of cash left to burn. One industry consultant who declined to be named given their involvement in the sector said they expect 30 to 40 per cent of pot companies will soon become distressed, go bankrupt or be acquired by another company.

Sarugaser goes even further, saying the next five years will see only eight cannabis companies account for 80 per cent of the market, while the remaining 20 per cent will be shared among niche craft producers.

“We’re going to see massive consolidation and attrition over the next five years,” he said.