TSX on a roll in 2019 after two stellar quarters

Pot stocks led Canada’s equity benchmark to its best first quarter since 2000, but strategists are questioning whether the rally has legs after gains slowed in March.

The S&P/TSX Composite Index ended the quarter at 16,102.09, up 12 per cent since the beginning of the year and just 3 per cent off its record high of 16,586.46 reached last July. That followed an 11 per cent slump in the fourth quarter. The index isn’t far from the 16,644-level that analysts predicted for the end of 2019, based on estimates gathered in December.

“We got in two months what we thought we’d achieve through the course of the year,” Shailesh Kshatriya, director of Canadian investment strategies at Russell Investments, said in a phone interview. “It’s a bit disconcerting.”

The rally continued on the first session of the second quarter, with the S&P/TSX gaining as much as 0.7 per cent Monday morning.

The gains in global equity markets come down to two main factors: a rebound from the “overly negative move” in the fourth quarter and an increasingly dovish tilt from many of the world’s biggest central banks, Doug Porter, chief economist at Bank of Montreal, said in a note to clients. 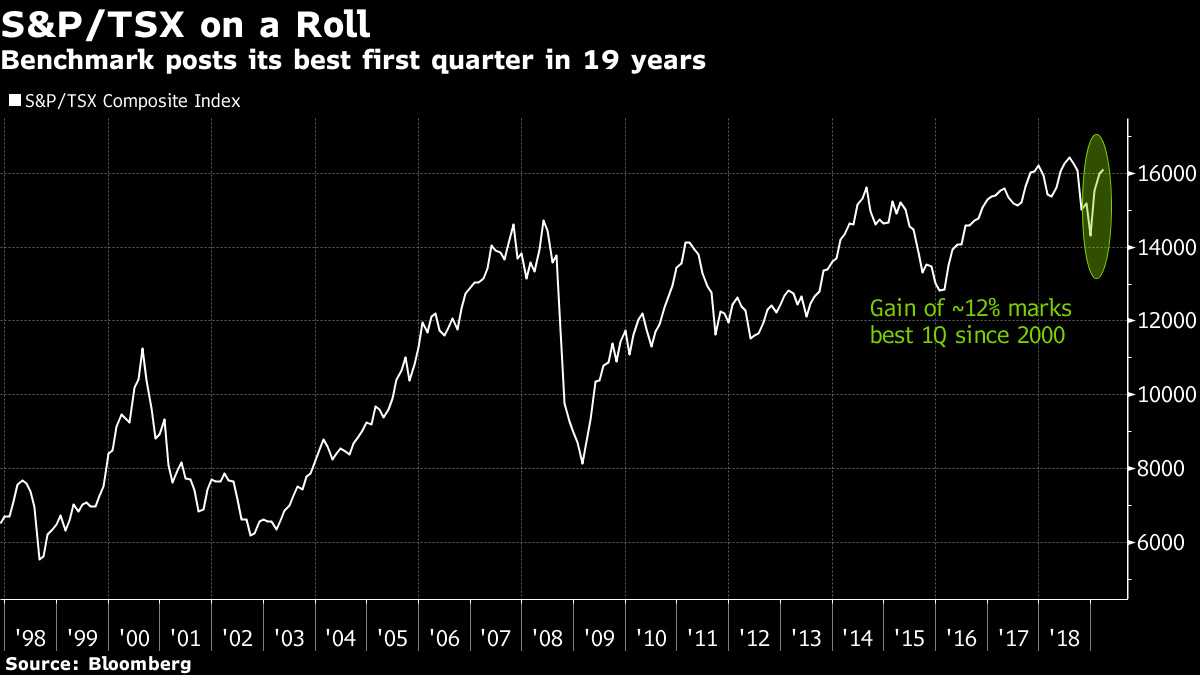 Dvai Ghose, former global head of equity research at Canaccord Genuity Group Inc., expects the Canadian market to soften over the next 12 to 18 months as it gets “caught up by slower economic growth from the U.S.,” even though the fundamentals aren’t too bad, he said.

“I don’t think valuations are that stretched, I don’t think macro’s that bad, I’m just saying I think we’ll probably have a couple quarters of recession next year and you’ll see 10, 15 per cent pullbacks,” Ghose, who retired on March 29, said in an interview at Bloomberg’s Toronto office.

Kshatriya is particularly focused on the Canadian business cycle, which “has clearly decelerated over the course of the last 12 months or so” based on trade and consumption data, while earnings revisions have been “deeply negative.”

“It’s not unprecedented but it is unusual that you have such sharp negative revisions at a time when the equity markets are pushing higher,” he said. “That would argue for a bit of a pause.”

Brian Belski, chief investment strategist at BMO Capital Markets, takes the opposite view, arguing that “typically and historically when you see these types of negative moves in revision trends,” it signals that a market rebound is around the corner.

“Although unsurprisingly we have seen some softening in fundamentals recently, overall growth remains resilient and supportive of higher valuations,” Belski wrote in a March analysis. “Barring a broad global recession, which we do not expect, the market has likely already priced in a significant economic and earnings slowdown.