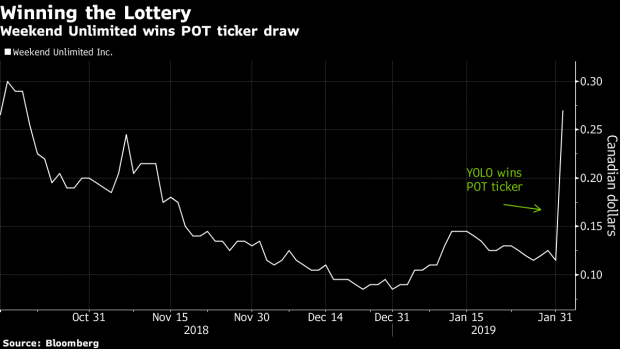 (Bloomberg) -- Little illustrates the mania for cannabis investments better than the unprecedented demand over the stock symbol POT, but new recommendations from the World Health Organization suggest some of that frenzy may not be unwarranted.

Tiny Vancouver-based cannabis company Weekend Unlimited Inc. saw its stock gain as much as 148 percent Friday after winning out over 40 other companies in the first-ever lottery for a stock ticker held by Canadian exchanges. Weekend Unlimited, which previously traded under YOLO, short for “you only live once,” wasn’t exactly lacking a memorable ticker.

In a weird twist, the YOLO symbol may find new life in another pot-related security, as the AdvisorShares Pure Cannabis ETF has filed to trade on the New York Stock Exchange under YOLO.

In more serious news, the WHO is recommending that cannabis and its resin be removed from Schedule IV, the most restrictive category of a 1961 drug convention that governs international treaties. The WHO is also moving to clarify that CBD containing less than 0.2 percent THC is not under international control at all.

If adopted, these recommendations would recognize changing attitudes toward the drug and its medical properties, potentially encouraging fence-sitting politicians to speed up the pace of legalization. They could also be a “catalyst for Big Pharma to further assess the global medical cannabis opportunity,” according to BMO analyst Tamy Chen.

“The treaty’s recommended cannabis rescheduling provides countries additional political cover to reexamine their current state on cannabis, given it serves as the regulatory framework for many,” writes Bloomberg Intelligence analyst Kenneth Shea.

The proposals will now go to the United Nations’ Commission on Narcotic Drugs, whose 53 member nations will have the chance to vote on them, likely in March.

POT hype and WHO recommendations aren’t making it any easier to advertise cannabis brands, at least not yet. Earlier, this month, CBS declined to air a commercial touting the benefits of medical marijuana during the Super Bowl and Facebook has booted some pot sellers off Instagram, Bloomberg’s Craig Giammona reported last week.

The restrictions are even tighter in Canada, where nearly all forms of marketing and branding are prohibited. Our pot containers here are dominated by a big red stop sign-shaped symbol that says “THC” and a yellow warning label that dwarfs the logo, much like cigarette packages. This makes it difficult to spread brand awareness except through word-of-mouth, companies argue, and may be one of the reasons behind the slow ramp-up in legal sales.

The Canadian government reported that total cannabis sales in December were up 4 percent from the month before, a muted gain given that November sales marked a 42 percent decline in per-day recreational pot sales from October, when legalization took effect.

The fact that total inventory continues to grow, hitting nearly two months’ worth of dried pot and five months’ of cannabis oil at the end of December, indicates that Canada’s ongoing supply shortage is more a function of supply-chain problems than a lack of product, according to Eight Capital analyst Graeme Kreindler.

“The process of getting products from vault to shelf remains a key step in alleviating supply issues in the Canadian market,” Kreindler said.

The ongoing shortages, whatever their root cause, have raised concerns among some in the industry that it won’t be ready to meet demand for edibles and concentrates, which were expected to join dried flower and oils on store shelves by October of this year. However, Justin Trudeau’s pot czar told Bloomberg’s Josh Wingrove last week that sales may lag regulations, citing the 17-week gap between the federal pot law passing last June and the formal market opening in October.

According to Keith Merker, CEO of WeedMD Inc., “It’s classic cannabis industry stuff; you’re operating in this mist of uncertainty and trying to make business decisions that are appropriate.”

The lack of clarity isn’t deterring big U.S. funds from sniffing around the industry. Funds with $100 billion or more in assets under management are exploring lending to Canadian cannabis companies as a way to gain expertise in the burgeoning market ahead of potential legalization, my colleague Paula Sambo and I reported last week.

The idea is to provide first-lien loans, which are first to be repaid when a company fails, to mid-tier pot firms, according to Cormark Securities Inc.’s Alfred Avanessy. This would open up a whole new world of financing to the industry, which has largely relied on equity raises and convertible debt to date.

--With assistance from Craig Giammona.

To contact the editors responsible for this story: Courtney Dentch at cdentch1@bloomberg.net, Jacqueline Thorpe, Steven Frank