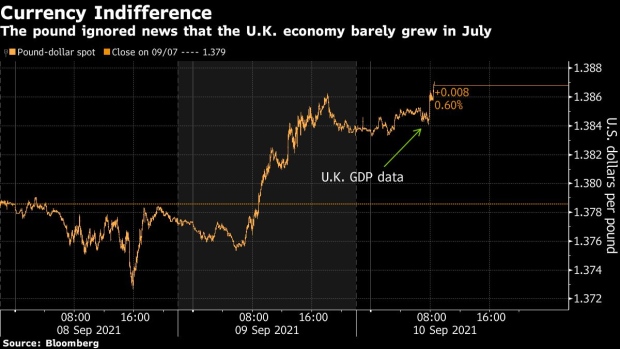 (Bloomberg) -- For pound traders, the Bank of England’s renewed hawkishness is outweighing any bad news emerging from the U.K. economy.

Sterling shrugged off the announcement that the country’s economic rebound ground to a halt in July, with the currency rising 0.3% to $1.3879 as of 9:06 a.m. London time.

It’s a sign that any numbers on the country’s rebound from the pandemic, especially those with a two-month lag, are secondary to signals from the central bank. Governor Andrew Bailey told lawmakers on Wednesday that while growth was plateauing, he is among officials who think a minimum criteria for tighter U.K. monetary policy has been met.

U.K. Economy’s Coronavirus Rebound Grinds to a Halt in July

“The BOE governor’s comments earlier this week were a bit hawkish,” said Jane Foley, head of foreign-exchange strategy at Rabobank. “That said, tax hikes and softer data could change that.”

Money markets are betting the BOE will hike interest rates 15 basis points by May with a cumulative increase of 35 basis points expected by the end of next year. That would put it ahead of the Federal Reserve and the European Central Bank in the race to normalize policy.

The pound has been one of the worst performers in the Group-of-10 economies over the past month, rising just 0.3% against the US dollar and only outperforming the Canadian currency.

Moves in sterling after monthly GDP releases over the past year have tended to be muted, said Lee Hardman, a strategist at MUFG. “We expect the GBP to give back some of its recent gains as BoE rate hike expectation are pared,” he added.