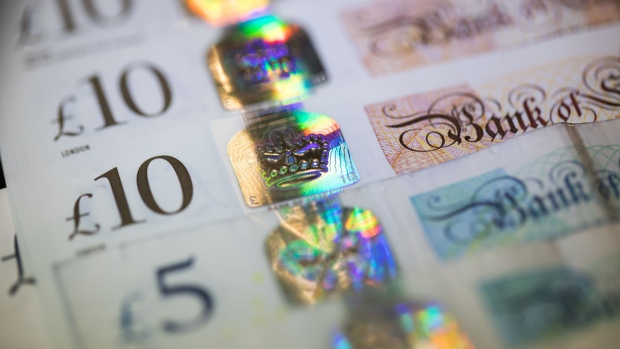 (Bloomberg) -- The pound plunged by the most since March 2020 and hit the lowest in 37 years against the dollar, as the UK government unveiled a fiscal stimulus package that threatens to fuel inflation and stoke the nation’s ballooning debt.

Sterling fell by as much as 3.7% to $1.0840 on Friday, triggering talk among investors about parity with the euro and the dollar and drawing comparisons with emerging markets as the country’s bonds also tumbled.

Investors are questioning how Chancellor of the Exchequer Kwasi Kwarteng will fund the most radical package of tax cuts for the UK since 1972, saying the move would fuel even-higher inflation and force the Bank of England into more aggressive tightening. The reduction in levies both on worker pay and companies will cost as much as £161 billion over the next five years.

“It’s hard to imagine a worse setup for the pound,” said James Athey, investment director at abrdn. “As ever in such EM-esque situations the worry is that once this cat is out of the bag even a return to orthodoxy might not quell the investor rush for the exit.”

That means an end to the pound’s rout may not be in sight. Bloomberg’s options pricing model now shows a one-in-four chance the pound will reach parity with the dollar in the next six months, up from 14% on Thursday. Risk reversals, a barometer of market positioning and sentiment, show that traders see the greatest downside risks for the sterling over the medium term in two years.

Ten-year gilt yields posted their biggest one-day jump on record in Bloomberg data going back to 1989, closing 33 basis points higher on the day at 3.83%.

Bluebay Asset Management LLP chief investment officer and senior portfolio manager Mark Dowding said he’s been short on the pound for “awhile now” and only added to that position Friday.

“We think the government plans will challenge finances and that this will continue to weigh on UK gilts and the pound,” he said, adding the pound can reach parity versus the US dollar and the euro.

The UK’s Debt Management Office increased its gilt sales plan for the fiscal year 2022-23 by £62.4 billion ($69.8 billion) to £193.9 billion to fund the spending. That compares to an estimated £60 billion increase expected by eight banks surveyed by Bloomberg.

The last time the pound was this weak was in 1985. Back then, a strong dollar was again putting pressure on global currencies, prompting major economies to reach an agreement to stabilize the foreign exchange market with the Plaza Accord. While a strengthening dollar is again responsible for some of the pound’s decline, many of the currency’s problems today have also been self-inflicted.

Stephen Gallo, head of European FX strategy and Bank of Montreal, said that the pound’s problems “have been brewing for years.”

“In 2020 and 2021 the dollar was clobbered by risk on and Fed stimulus, as well as huge fiscal stimulus just about everywhere,” he said. “Now those factors have gone into reverse and they have been exacerbated by the war in Europe. But as far as G-10 currencies go, the GBP has not had strong currency fundamentals for a long time.”

For Citigroup Global Markets, shorting the pound against the US dollar “is the A trade” as the Federal Reserve pushes rates higher, fueling the dollar. Also the UK’s wide current account deficit calls for a weaker currency, according to the bank.

“The UK has jumped further down the fiscal rabbit hole in the same week the BoE announced active gilt sales. This is GBP bearish,” Citi strategists including Jamie Fahy wrote in a note on Friday.

Meanwhile, JP Morgan Chase & Co. currency analysts Meera Chandan and Patrick Locke lowered their cable target to $1.05 from $1.10 and are recommending shorts on the pound against the dollar and the Swiss franc.

“It makes me very sorry to say, but I think the UK is behaving a bit like an emerging market turning itself into a submerging market,” former US Treasury Secretary Lawrence Summers told Bloomberg Television on Friday. “I think Britain will be remembered for having pursued the worst macroeconomic policies of any major country in a long time.”