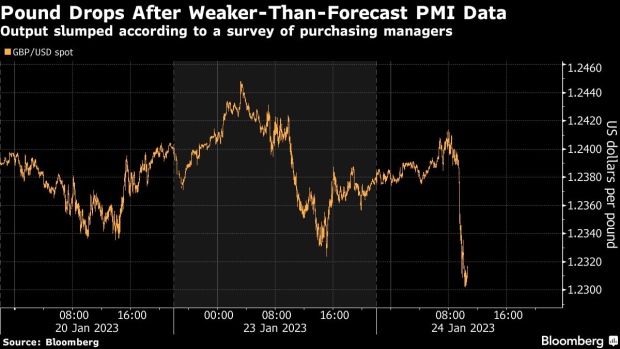 (Bloomberg) -- Mounting signs the UK economy has lurched into a recession are casting doubt on how far the Bank of England will be able to keep raising interest rates, adding pressure on the pound and fueling a rally in government bonds.

Sterling weakened as much as 0.6% versus the dollar on Tuesday, leading losses among the Group-of-10, as British companies signaled output dropped in January at the fastest pace since the start of the pandemic. Gilts jumped, led by shorter-dated maturities.

The latest round of weak economic data adds to lingering concern that the UK won’t avoid a sharp slump, putting at risk the BOE’s plan to keep tightening its policy to curb inflation. Traders trimmed wagers for future rate rises on Tuesday, betting on around one percentage point more of increases by August, from 105 basis points at Monday’s close. The next central bank meeting is on Feb. 2, when policy makers are widely expected to raise rates by half-a-point.

“Strikes, staff shortages, a weak external sector, the rising cost of living and tighter monetary conditions are having a toll on economic activity,” said Roberto Cobo Garcia, head of G-10 foreign-exchange strategy at BBVA in Madrid. “We remain bearish and expect some additional weakness and EUR/GBP to break above 0.90 in the coming weeks as macro data confirm a challenging scenario.”

The spread between two-year UK gilts and their German counterparts shrank to around 80 basis points, its narrowest since the start of the year, suggesting growing expectations that the BOE may slow its interest-rate raising campaign in the coming months, while the European Central Bank continues to tighten aggressively.

“This reinforce our view that GBP rates will tighten relative to EUR rates,” said Antoine Bouvet, senior rates strategist at ING Bank. “BOE hike pricing is still elevated whilst pricing of ECB hikes is still understating the amount of tightening the ECB has to do.”

Demand for UK bonds was also in evidence in a syndication for a 30-year gilt with an orderbook of over £65 billion, according to bankers working on the deal.

“The past 24 hours have presented GBP traders with two reminders that the UK economy isn’t out of the woods just yet,” said Simon Harvey, head of foreign-exchange analysis at Monex Europe Ltd.

--With assistance from Greg Ritchie and Libby Cherry.