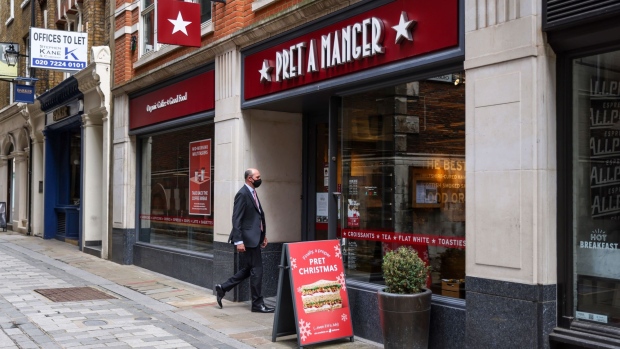 A pedestrian enters a Pret A Manger Ltd. on Bow Lane in London, U.K., on Monday, July 12, 2021. In a news conference on Monday, U.K. Prime Minister Boris Johnson is widely expected to confirm that mandatory curbs will end as planned as England approaches so-called "Freedom Day" on July 19. , Bloomberg

(Bloomberg) -- Pret A Manger Ltd. will add stores in the U.S., U.K., Europe and the Middle East as it seeks to double revenue in the next five years, Chief Executive Officer Pano Christou said in an interview.

The coffee and sandwich chain’s growth plans will be backed by an investment of 100 million pounds ($137 million) from owner JAB Investors and founder Sinclair Beecham.

“We still see there’s a lot of opportunities for us in the state of New York, we’ve just got two stores in Philadelphia, we have a handful of stores in Washington, D.C.,” Christou said. “We are equally exploring drive-through opportunities in the U.K. over the next year or so and we know the U.S. is a huge market for that as well.”

Christou also said that although Pret’s international markets could make up a bigger source of sales growth than the U.K. in the future, he still sees a “huge” opportunity to expand domestically. The chain has 400 stores in the U.K. while Subway has over 2,000 sandwich shops, and Pret plans to add 200 locations over the next two years. The company will use its offices in London, Paris, Hong Kong, Dubai and New York as outposts to build out regional teams and open more cafes, he said.

Earlier this year, Pret received an investment of 185 million pounds to help it withstand the impact of the pandemic, which saw the company’s fiscal 2020 sales more than halve to 299 million pounds, according to corporate filings.

Pret’s performance has started to recover in some of its most important markets, which include London’s financial districts and shopping areas. In New York, demand in the geographical cluster that includes Wall Street reached the highest level last week since the outbreak of Covid-19.

Bloomberg has been monitoring Pret’s weekly transaction volume since May using the Pret Index, which shows whether people are venturing back out to shop and where workers are returning to the office. Some of the locations tracked, including London’s West End retail and theater hub, are almost entirely back to pre-pandemic levels.

Earlier this year, Pret scrapped its “follow-the-skyscraper” expansion program that focused on city-center locations. The chain has instead sought faster growth from deliveries, a loyalty program, sales in supermarkets and by moving stores to areas outside central London, where sales are now higher than they were before the pandemic.