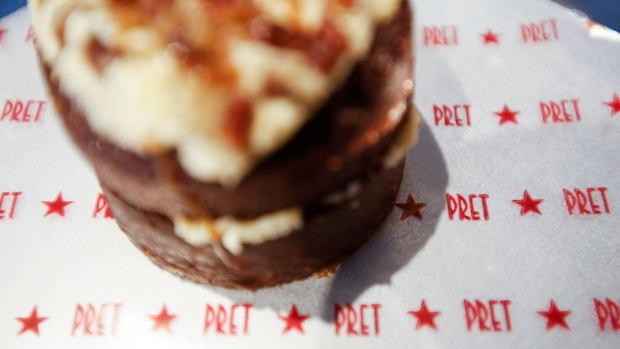 A cake sits on branded paper inside a branch of food retailer Pret a Manger Ltd. in this arranged photograph in London, U.K., on Monday, March 27, 2017. Food chain Pret a Manger said it's concerned about Brexit because just one in 50 applicants seeking jobs is British. Photographer: Luke MacGregor/Bloomberg , Bloomberg

(Bloomberg) -- Pret A Manger Ltd. plans to expand into India via an agreement with Reliance Brands Ltd., in what the UK sandwich chain described as its “most ambitious global franchise partnership.”

Reliance Brands, part of the Mukesh Ambani family’s oil-to-telecoms conglomerate, will launch and build the Pret brand in India, according to an emailed statement from the companies. As many as 100 Pret shops are expected to open in India over the next five years, with about 10 stores planned in the first year in major cities and travel hubs.

The move into India offers growth prospects at a time when Pret’s home market is facing growing economic challenges. Price surges squeezing consumers extend from gasoline to electricity to groceries and look set to worsen. In the UK, Pret is expanding in suburbs and offering more affordable options.

Reliance Brands is “a great partner to help us,” with years of expertise in the market, Pret Chief Executive Officer Pano Christou said.

The partnership marks the first foray into the food business for Reliance Brands, according to the statement. The group also has other retail interests, including in the luxury sector, partnering with a wide range of brands including Tiffany, Burberry and Coach.

Bloomberg’s Pret Index has tracked workers’ return to office after Covid lockdowns, based on traffic at the company’s shops across parts of the UK and beyond. Though visits have been increasing, sales in London’s financial hubs were hurt in the most recent week by the UK’s worst rail strike in three decades.