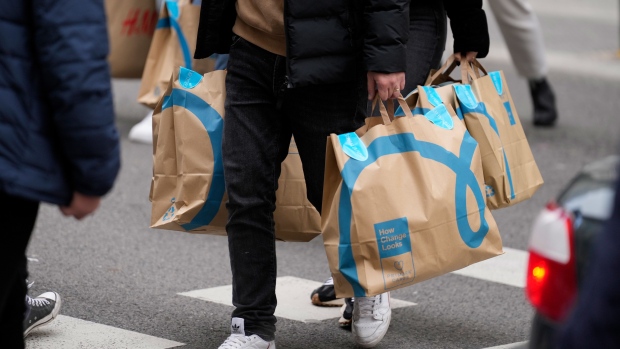 (Bloomberg) -- Budget fashion retailer Primark had a record week in the run-up to Christmas as shoppers hunted for bargains during the worst cost-of-living crisis in decades.

Owner Associated British Foods Plc said that Primark’s sales jumped 18% in the key holiday period as shoppers’ basket sizes increased and markdowns on clothing items eased. The performance was better than expected and ahead in all markets the clothing retailer operates in.

“Discretionary spend did not suddenly fall off in a very big way,” John Bason, finance director at AB Foods, said in a phone interview. “If anything the spend on apparel has gone marginally up.”

The conglomerate, whose business ranges from grocery to agriculture, said it’s also starting to see the benefit of pushing up food prices in recent months to counter rising inflation which has led to the biggest surge in prices in British supermarkets in years.

AB Foods’ stock rose initially before falling back 1% in early trading in London.

AB Foods is still guiding that the retailer’s profit margins will be squeezed this year, however, as it isn’t passing on all higher costs to cash-strapped consumers. Profit is expected to decline across the broader group this financial year as rising energy bills and the stronger dollar weigh on Primark, which generates most of AB Foods’ profit. The company is seeking to make cost savings and has vowed to not increase prices further at Primark after raising them last year.

Shoppers at Primark particularly spent on clothing to keep them warm, like winter leggings in recent months, while womens’ partywear and beauty products were also popular ahead of Christmas parties, according to Bason. New shoppers are visiting Primark, switching from other retailers, he said.

Primark’s new UK website, which allows shoppers to check stock availability in stores, has seen traffic increase around 85% since last year, with double the average pages viewed per session.

AB Foods announced a £500 million ($620 million) share buyback in November and raised its dividend by 8% despite warning of significant cost inflation particularly in its food arm, which sells everything from bread to tea and Ovaltine.

However, while inflation is still a factor it is becoming less volatile and some commodity costs have recently declined, the company said Tuesday.