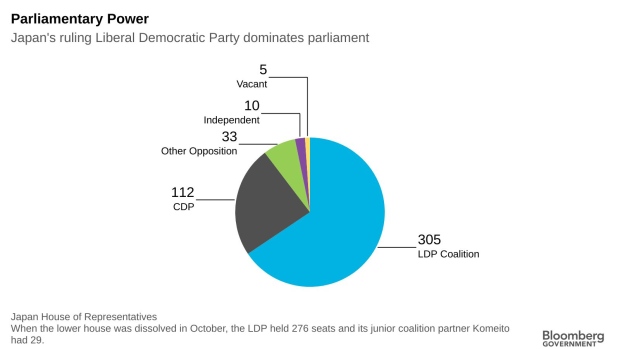 Fumio Kishida, Japan's prime minister, gestures while speaking during an election campaign event in Tsukuba, Ibaraki Prefecture, Japan, on Tuesday, Oct. 26, 2021. Kishida's ruling Liberal Democratic Party (LDP) is likely to keep substantially more than half the seats in parliament in this weekends general election, according to a media poll. , Bloomberg

Kishida, whose Liberal Democratic Party coalition is expected to lose seats, but retain its majority in parliament in the Sunday election, is heading into the final days of campaigning, with the Bank of Japan expected to stand pat on policy Thursday. He’s promised tens of trillions of yen in economic stimulus to speed recovery from the economic hit of Covid.

The new premier, who took office earlier this month, has maintained his predecessors’ line that defeating deflation is the most important target in managing the economy. The opposition Constitutional Democratic Party has said it favors a “gradual return to normal monetary policy function” through communication with financial markets, while saying that wouldn’t happen immediately.

The two parties’ leaders are keeping up their breakneck pace of public appearances ahead of Sunday’s election, with Kishida crisscrossing northern regions of Japan, while his rival Yukio Edano focuses on party strongholds in the suburbs of Tokyo.

Media surveys show the CDP, which has formed a left-leaning alliance with other opposition parties, may grab some seats from the LDP, but is not generating the level of interest that could lead to a change in government. Losing too many seats could weaken Kishida’s grip on his own party, increasing the risk he could be dispatched through the “revolving door” that claimed six premiers between 2007-2012.

Three days to go to the Oct. 31 vote that determines if Kishida can keep enough seats to maintain the outright majority the LDP has held since 2012. When parliament was dissolved for the election, the LDP held 276 seats. If the party slips below the 233 simple majority in the 465-seat lower house, it’s expected to stay in power with the help of its junior coalition partner Komeito, which held 29 seats.

Other opposition parties include the Japan Communist Party, which held 12 seats in the lower house, Ishin, a metro-based group with 11 seats and the Democratic Party of the People with 10. Independents held 10 seats and there were four vacancies.

A survey by Kyodo News conducted Oct. 23-26 found the LDP and coalition partner Komeito may secure a stable majority in the election, though the LDP is expected to lose seats. The main opposition Constitutional Democratic Party is struggling to secure any more seats than it held before parliament was dissolved, Kyodo said. The agency surveyed about 119,000 people by phone.

A separate poll published by NHK on Monday found 48% of respondents said they supported Kishida’s cabinet and 59% said they approved of the government’s handling of the coronavirus, as cases and deaths dwindle rapidly.