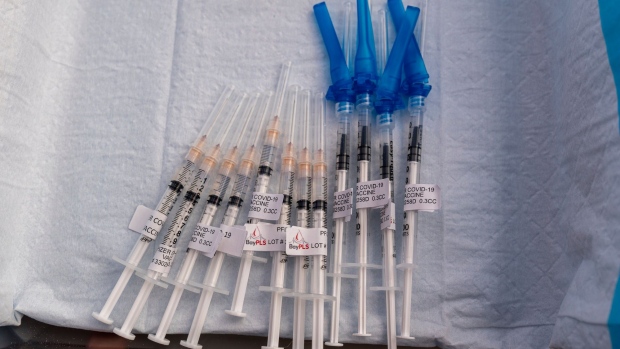 A resident drops a Covid-19 swab into a test tube at a testing site in Sacramento, California, U.S., on Wednesday, Jan. 12, 2022. California marked a pandemic high for positive coronavirus test results on Monday with more than 1 out of 5 tests showing Covid-19 infection, as hospitals braced for an even greater influx of new patients. , Bloomberg

(Bloomberg) -- Prior infection with Covid-19 gave at least as much protection from a repeat bout of the coronavirus as vaccination during the rise of the delta variant, according to a U.S. government study.

Before delta arose last summer, vaccinated people with no previous cases were about half as likely to be diagnosed with Covid as unvaccinated people who’d had the disease earlier, according to a U.S. Centers for Disease Control and Prevention analysis of data from California and New York. After delta became dominant in late June and July, those with prior cases alone were better protected than those who’d only received vaccines, without an earlier infection.

The study released Wednesday adds a new twist to the vaccine debate, giving ammunition to those who’ve declined shots citing their protection from an earlier case of Covid. However, the researchers said, the findings don’t apply to the omicron strain of the virus, which is highly transmissible and now accounts for almost all U.S. sequenced Covid cases.

The study also doesn’t take into account the rollout of boosters that have been shown to restore protection against the immune-evading omicron variant. And the findings don’t change the CDC’s recommendations on vaccines, Benjamin Silk, a lead in the agency’s Covid response team, said on a call with reporters.

“We know that vaccination is still the safest way to protect yourself against Covid,” he said.

The study published in CDC’s Morbidity and Mortality Weekly Report looked at vaccinated and unvaccinated adults from May to November 2021, before and after delta’s summer surge. By the fall, people who’d had a previous case of Covid, vaccinated or not, were far less likely to be diagnosed with the disease than those who’d only been vaccinated.

The differences in the study, which analyzed records from hundreds of thousands of people in two of the most populous U.S. states, were stark. In October, vaccination only reduced Covid rates by 6.2-fold in California and 4.5-fold in New York, compared with the unvaccinated people who had never been infected.

Health officials are looking for ways to limit the spread of omicron as cases climb across the country. The CDC last week urged wider use by the general public of medical-grade face masks that had been earmarked for health workers. In late December the agency relaxed Covid-19 guidelines to say that people can leave isolation five days after their symptoms stop if they wear masks in public for an additional five days.