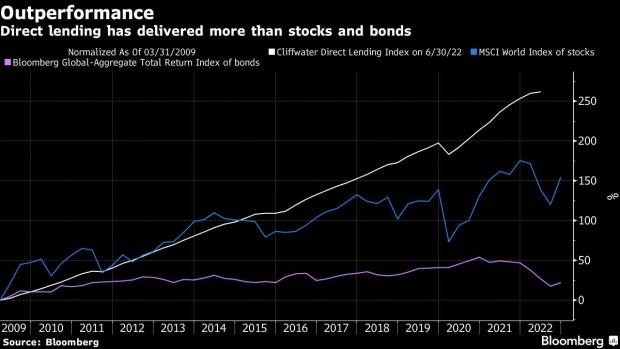 (Bloomberg) -- After winning over some of the biggest retirement plans in the US, private credit managers have found new fertile ground for their investment pitch: Australia’s $2.3 trillion pension industry.

Four of the top-10 pensions Down Under -- Australian Retirement Trust, HostPlus, UniSuper and Colonial First State -- are making significant increases to their private credit allocations, according to recent statements and interviews with Bloomberg News. AustralianSuper, the nation’s largest, is midway into a three-year push to triple its allocation.

That’s music to the ears of private credit funds, which have outperformed other asset classes so much that some US pensions and endowments can’t buy more without breaking allocation limits. There’s no such problem for Australia’s superannuation operators, as the pensions are known locally. They are estimated to have less than 1% of their combined investments in private credit.

“We’ve continued to increase deployment into private credit opportunities and expect that will continue,” said Elizabeth Kumaru, head of private corporate assets for Australian Retirement Trust. The A$215 billion ($146 billion) trust has a 5% allocation to private credit after small increases over the past year.

HostPlus, with about A$90 billion in assets, has tripled its holdings in private credit in the past two years to A$1.4 billion. That includes a $500 million commitment in June to an Asia-focused fund launched by Apollo Global Management.

Oaktree Capital Management, Kayne Anderson Capital Advisors and Bain Capital Credit are among other US players in private credit that have secured investments from Australian pensions.

They’ve won over managers seeking to increase alternative investments, and by offering a product that’s easily outperformed the world’s public stock and bond markets over the past decade.

A gauge of US direct lending, which accounts for roughly half of private credit assets, rose 2.3% in the first half of this year as stocks and bonds suffered double-digit declines.

While private credit has been booming for more than a decade, it’s an area of finance that is little known outside the investment community.

For superannuation managers, a typical investment involves pledging several hundreds of millions of dollars to a US private credit fund, in return for interest payments. The credit funds lend predominantly to mid-sized US companies, which lack the scale to issue bonds and have been under-served by banks in the wake of stricter capital requirements since the global financial crisis.

Interest rates on these loans this year have been in the vicinity of 10%-15%, said Ken Kencel, chief executive of New York-based Churchill Asset Management, during a trip to Australia to meet superannuation managers.

Jonathan Armitage, chief investment officer of Colonial First State, said he was focused on building up private credit holdings at the A$139 billion pension and investment fund. Colonial doesn’t split out private credit in its published holdings data.

UniSuper, which manages A$105 billion, recently expanded in private credit alongside a broader increase in credit. It also doesn’t split out its private debt data.

AustralianSuper, with A$261 billion in assets, aims to have A$15 billion allocated to private credit by 2024.

While there is no official tally of the superannuation sector’s holdings in private credit, it may currently be around A$30 billion, according to estimates from consultancy Rainmaker Information.

“There will be geographic expansion as these markets continue to evolve along a similar trajectory with a lot of the same trends we saw in the US,” Michael Arougheti, chief executive officer of Ares Management, said of private credit in an interview on Bloomberg Television. “If we continue to demonstrate durable performance through cycles then the appetite for the asset class will continue to grow significantly.”

Yet it is not without risk. With the US economy slowing, more companies that private credit funds lend to may begin defaulting on their repayments next year as earnings decline and interest on their floating-rate loans rises.

“Private credit is a place people can go to benefit from rising rates,” Arougheti said. “The flipside of that is that as rates are going up, debt service becomes more challenging.”

An additional problem is the less stringent valuation process for private credit portfolios compared with assets in public markets, which can leave poor investments hidden for longer.

Still, demand for private credit globally has seen the market expand three-fold in the past decade to $1.3 trillion, according to data from Preqin. And the research firm forecasts the sum will eclipse $2 trillion within five years.

--With assistance from Davide Scigliuzzo and David Brooke.