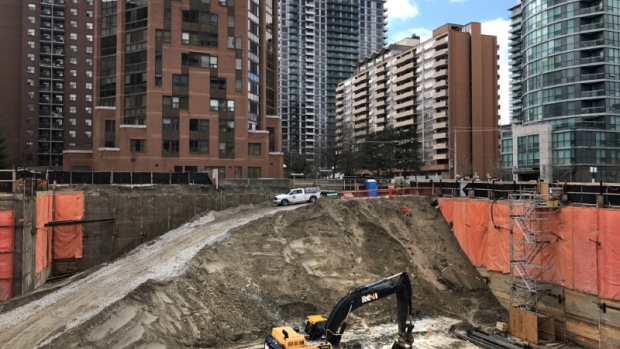 Construction equipment is parked at the bottom of a pit on the site of a condominium complex off Redpath Avenue in Toronto, Ontario, April 1, 2017 , Reuters/Chris Helgren

Real estate companies helped push the Canadian stock market to a record high before the coronavirus crisis. Now the sector is proving to be a millstone.

Real estate is the second worst-performing group in the S&P/TSX Composite Index since the market peak of Feb. 20, dropping 43 per cent. Only energy stocks have been bigger losers.

Retail is a major weak spot. Shopping-center landlords such as SmartCentres Real Estate Investment Trust and RioCan REIT have lost almost half of their market value in the crash. Ed Sonshine, RioCan’s chief executive officer, said he expects a drop of up to 25 per cent in revenue over a two-month period as nail salons, restaurants and apparel stores close to help fight the virus.

Even large national tenants such as Cineplex Inc. and Indigo Books & Music Inc. are looking for a break on rent, Sonshine said. “They’re big strong companies but we know they’re asking for some help and we are going to give some of them help,” he said in a telephone interview, adding that some smaller tenants won’t survive unless they are given rent relief.

Property owners across the U.S. and Europe are preparing for pain as economic activity grinds to a crawl. American retailers such as Mattress Firm and Subway have warned landlords they plan to withhold or reduce rental payments after closing stores because of the virus. Real estate investor Tom Barrack warned this week the commercial mortgage market is near collapse in the U.S. and said it could create a “domino effect” of calamitous economic consequences without government action.

In Canada, booming demand for offices and low interest rates had made real estate a magnet for investors. The S&P/TSX Composite Real Estate subindex delivered an annualized return of 8.7 per cent, including dividends, in the five years to the end of 2019. That far outpaced the 6.3 per cent total return for the TSX.

Home Offices
The virus has changed the outlook even for owners of prime downtown office towers such as Brookfield Property Partners LP. Its Canadian-listed units have fallen 53 per cent this year, despite management’s view that most of its business is sound and that 93 per cent of its core office portfolio is leased.

“We can only refer you to 2008-2009 when we had no major issues within our portfolio,” Chief Executive Officer Brian Kingston said in a March 20 letter to investors.

One difference this time is that office workers have been forced to work from home en masse. The experience may cause a longer-term shift in how companies think about their workers and the office space they need, said Anthony Scilipoti, CEO of Toronto-based Veritas Investment Research Corp.

“The concept of office? My highest-paid employee is my landlord and I bet that’s the case for many small businesses,” said Scilipoti, whose employees are all working from home, as is much of Canada’s financial industry.

The sell-off has hit all types of commercial property companies. But the two worst performers in the 25-member TSX real estate index have heavy exposure to Alberta, the center of Canada’s oil industry.