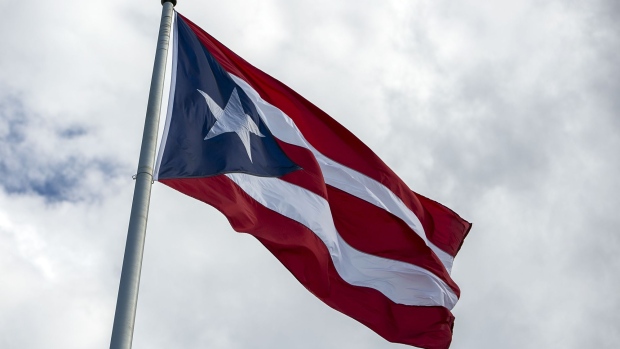 A Puerto Rican flag flies outside the Capitol of Puerto Rico building in San Juan, Puerto Rico, on Saturday, May 13, 2017. With Wall Street's help, the U.S. commonwealth borrowed tens of billions in the bond markets, only to squander much of it on grand projects, government bureaucracy, everyday expenses and worse. Debts were piled on debts, even as the economy gave way. Photographer: Xavier Garcia/Bloomberg , Bloomberg

(Bloomberg) -- Puerto Rico’s House of Representatives approved a bill late Tuesday that allows the commonwealth to issue new bonds to replace existing debt and cut its obligations, a key step that moves the island closer to resolving its record bankruptcy.

The Senate failed to take up the measure on its floor, as that chamber works to garner sufficient votes to pass the legislation, Rafael “Tatito” Hernandez, Puerto Rico’s speaker of the house, said in a telephone interview.

“It’s always an issue of votes in every deal in the House and Senate because we don’t have a supermajority,” Hernandez said. “So we have to make deals. That’s the way to do things.”

The legislation is needed so the commonwealth can execute a debt restructuring that will slash $33 billion of debt, including $22 billion of bonds, to $7 billion. The bill, which has Governor Pedro Pierluisi’s support, stipulates that Puerto Rico’s financial oversight board must remove a proposed 8.5% cut to some public-worker pensions from its debt restructuring plan, a major concession the panel agreed to last week to get island lawmakers to vote for the restructuring bonds.

The island’s legislature is under deadline to approve the bond bill as U.S. District Court Judge Laura Taylor Swain is set to hold confirmation hearings next month on the board’s debt adjustment plan.

The Senate is set to reconvene on Thursday and could take up the bond bill then. Senate President Jose Dalmau will need to round up the necessary votes.

Still, the more lawmakers tinker with the legislation, the greater the risk that the oversight board could determine that the bill fails to comply with Puerto Rico’s multi-year fiscal plan, which aims to keep spending in line with revenue collections.

The board has contemplated asking the court to authorize new bonds if Puerto Rico lawmakers fail to approve the new securities, a rare move in the $4 trillion municipal-bond market. State legislatures and local elected officials tend to authorize borrowings.

While the board has agreed to remove pension cuts from the debt plan, Swain may still require reductions to retirement benefits, according to the oversight board.

Pierluisi expressed his support for the bond bill during a press conference in San Juan on Tuesday.

“We will be able to leave the bankruptcy behind, which is a dark cloud over Puerto Rico,” Pierluisi told reporters.

Puerto Rico has been in bankruptcy since May 2017 after years of borrowing to cover budget gaps and population decline.