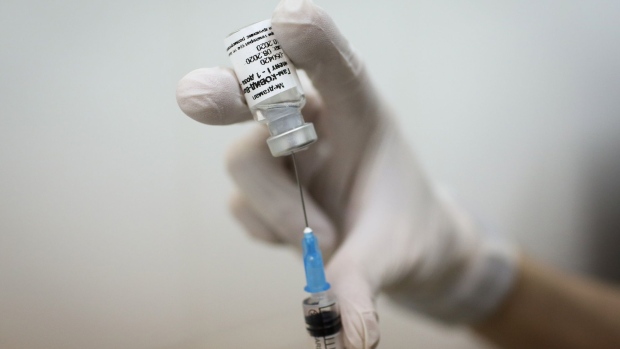 (Bloomberg) -- President Vladimir Putin told fellow world leaders last week that both of Russia’s Covid-19 vaccines, including one he championed as the world’s first inoculation against the disease, are safe and effective. That doesn’t mean he’s taken a jab.

“We have not yet begun widespread vaccination and the head of state can’t take part in vaccination as a volunteer. It’s impossible,” Kremlin spokesman Dmitry Peskov told reporters Tuesday, in response to a question on whether Putin had been inoculated. “The president can’t use an uncertified vaccine.”

Russia has the world’s fifth-highest number of cases globally, passing 2 million last week. Putin announced the registration in August of Russia’s Sputnik V vaccine and a second inoculation was approved in October, even as Phase 3 trials to establish safety and efficacy are still taking place.

Sputnik V’s developers said Tuesday that initial testing showed it was 91% effective in preventing infections, although it has not yet published final results in a peer-reviewed journal.

Russia has already begun vaccinating medical workers, teachers and officials. By the end of the year, producers aim to make about 2.9 million doses, according to Deputy Prime Minister Tatyana Golikova.