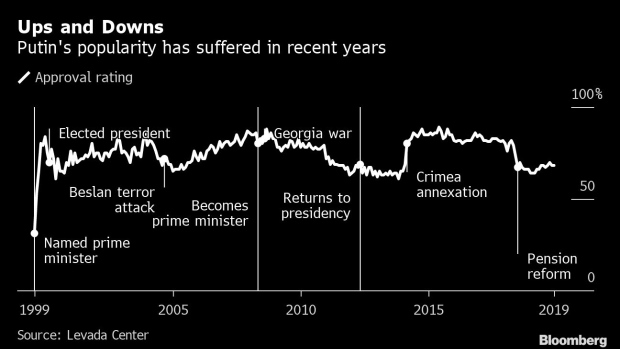 (Bloomberg) -- Warning that a shrinking population is a threat to Russia’s future, Vladimir Putin outlined a raft of new benefits for families aimed at stimulating them to have more children.

“Russia’s fate, her historical prospects, depend on how many of us there are,” Putin said at the start of his annual state-of-the-nation address to members of parliament and the government. “We have entered a very difficult demographic period,” he said, adding that low incomes are “a direct threat to our demographic future.”

Putin called for expanding the “maternal capital” program, which now provides about 467,000 rubles ($7,600) to families on the birth of their second child, to cover first children. Benefits will be increased by 150,000 rubles for families with two children, with more for three. Putin said the new measures, which also included welfare payments for poor families, would require “serious resources,” but didn’t specify how much they would cost.

In last year’s speech, Putin promised that Russians would “feel changes for the better” in the course of 2019. Real disposable incomes gained only 0.2% in the first nine months of last year, however, the latest period for which official data are available.

So far, while the government touts successes in bringing down inflation and interest rates, economic growth remains under 2% and below Putin’s targets. An ambitious infrastructure-spending plan he laid out when he was elected to his current term in 2018 has yet to get off the ground, while the government is squeezing other spending to build up reserves in case of another drop in oil prices or wave of sanctions.

The address comes as Putin marks 20 years in power having restored Russia’s international influence to a level unthinkable back in 2000 when he took over a barely solvent government from President Boris Yeltsin. But his foreign-policy triumphs in the Middle East and Europe are increasingly not enough to satisfy Russians frustrated with five years of stagnant living standards amid low oil prices and Western sanctions.

Putin’s approval rating has recovered only slightly since took it a hit in 2018 after he pushed through an unpopular increase in the pension age. Protests by local activists and environmentalists have spread across the country despite a deepening Kremlin crackdown on dissent. For the moment at least, however, Putin has the political stage largely to himself as he considers ways to extend his rule beyond the end of his current -- and under the current constitution, his last -- term in 2024. He’s already hinted at the need for constitutional changes.

--With assistance from Henry Meyer and Jake Rudnitsky.