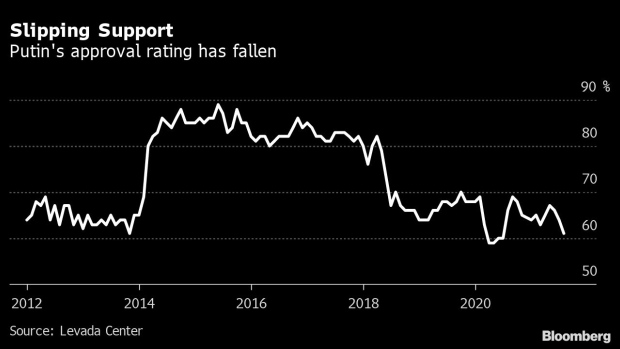 United Russia took a projected 45.2% of the party vote, according to a survey by pollster INSOMAR in 1,455 polling stations over three days of voting that ended Sunday, state television Rossiya 24 said. The Communist party was running second at 21%.

While Putin personally retains broad support, according to polls, United Russia recorded some of the lowest ratings in nearly a decade earlier this year, scorned by voters angry about stagnant living standards and other policies that are unpopular.

Official results are expected Monday. In an early tally of about 9% of votes cast, United Russia had about 38.6% of the party-list vote, Tass reported. Turnout nationally was at 45.2% as of 6 p.m. on Sunday, according to Tass.

The Kremlin took no chances, determined to ensure that United Russia won another commanding majority in the State Duma, or lower house. As well as eliminating rival politicians from the vote, authorities pressured Apple Inc. and Alphabet Inc’s Google to remove protest voting apps from their online stores. Putin also pitched in with promises of as much as 700 billion rubles ($9.6 billion) in pension and other spending.

“The Kremlin is showing that it maintains control,” said Alexei Makarkin, deputy director of the Center for Political Technologies in Moscow.

Already Russia’s longest-entrenched ruler since dictator Josef Stalin, the 68-year-old Putin last year took advantage of two-thirds control of parliament to push through constitutional changes that allow him to stay in office until 2036.

Some polls put the ruling party’s popularity as low as 27%. Still, the Kremlin is seeking to get about 45% of the party-list vote, squeezing independent competitors off the ballot and keeping turnout down to ensure the impact of loyalist voters among state workers and pensioners, according to people familiar with the planning.

United Russia will make up the rest of the seats needed for control in the district races that determine the other half of the Duma’s lawmakers, they said.

After mass protests triggered by elections in neighboring Belarus last year alarmed the Kremlin, Moscow strongly backed Belarus strongman President Alexander Lukashenko in crushing the opposition, despite criticism and sanctions from the West.

Russian authorities then mounted a fierce crackdown after tens of thousands of people rallied in cities across Russia in January following the imprisonment of opposition leader Alexey Navalny.

Authorities banned Navalny’s national network this year, forced his supporters into exile or jail and did all they could to sabotage his “smart voting” initiative that urges people to back the strongest candidate against United Russia.