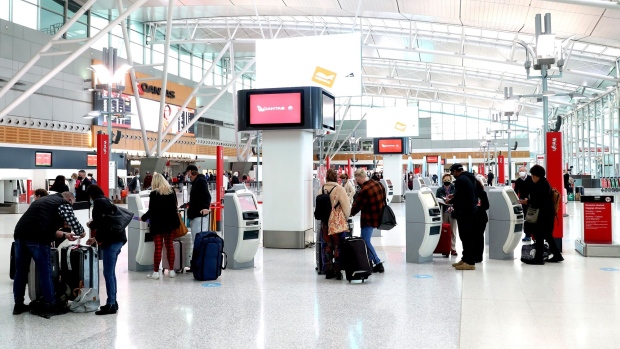 Travelers use self check-in kiosks for Qantas Airways Ltd. in a domestic terminal at Sydney Airport in Sydney, Australia, on Wednesday, June 23, 2021. While losses at airlines globally from Covid-19 are set to surpass $174 billion by the end of 2021 -- wiping out half a decade of profits -- Qantas has become one of the most financially secure carriers anywhere in the world. Photographer: Brendon Thorne/Bloomberg , Bloomberg

(Bloomberg) -- Qantas Airways Ltd. is gearing up for a Christmas rush, bringing back all its Australian workers and adding flights as the nation’s borders reopen after more than 18 months of near-isolation.

The airline will start its first commercial flights between Australia and India in almost a decade before Christmas, and flights to Singapore, Bangkok, Fiji, Phuket and Johannesburg will resume ahead of schedule, it said in a statement Friday. About 11,000 staff who have been stood down during the pandemic will return by early December.

The carrier will also bring back two of its mothballed giant A380s three months earlier than planned, and is in discussions with Boeing Co. about accelerating the delivery of three new 787 Dreamliners which have been in storage for most of the pandemic.

The changes come after Australia’s biggest state, New South Wales, said that from Nov. 1 returning fully-vaccinated citizens would no longer need to spend two weeks in hotel quarantine, effectively ending a border ban that has kept the nation largely isolated from the rest of the world since the pandemic started.

“This is the best news we’ve had in almost two years and it will make a massive difference to thousands of our people who finally get to fly again,” Qantas Chief Executive Officer Alan Joyce said.